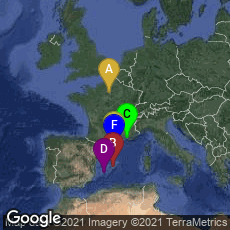 In 1788 the French Academy of Sciences, at the suggestion of Talleyrand, proposed the establishment of a new universal decimal system of measurement founded upon some “natural and invariable base” to replace Europe’s diverse regional systems. This project was approved by the Assemblée nationale in 1790 and a basic unit or “meter (metre)” of measurement proposed, which was to be one ten-millionth of the distance between the terrestrial pole and the Equator. In 1792 Méchain and Delambre were appointed to make the necessary geodetic measurements of the meridian passing through Dunkirk and Barcelona, from which the meter would be derived, and in 1793/94 (An II of  the French Revolutionary calendar), the French government introduced the metric system to the country through the publication of Instruction sur les mesures déduites de la grandeur de la terre, uniformes pour toute la république, et sur les calculs relatifs à leur division décimale issued in Paris by the Imprimerie Nationale.

Méchain and Delambre's scientific project was hampered by France’s political revolution, by the death of Méchain in 1804, and by the tedious calculations involved in converting one system to another; it was not until 1810 that Delambre was able to complete the final volume of the Base du système mètrique décimal.

Méchain and Delambre had determined the length of the meter by taking measurements over a meridian arc of 10 degrees. After Méchain’s death in 1804, the Bureau des Longitudes proposed that the meter’s length be redetermined more accurately by extending measurement of the arc of the meridian south to the Balearic Islands of Mallorca, Menorca and Ibiza. François Arago and Jean Baptiste Biot were assigned to this task. Arago was twenty years old at the start of this project. In 1806 he and Biot journeyed to Spain and began triangulating the Spanish coast. Their work was disrupted by the political unrest that developed after Napoleon’s invasion of Spain in 1807. Biot returned to Paris after they had determined the latitude of Formentera, the southernmost point to which they were to carry the survey. Arago continued the work until 1808, his purpose being to measure a meridian arc in order to determine the exact length of a meter.

After Biot's departure, the political ferment caused by the entrance of the French into Spain extended to the Balearic Islands, and the population suspected Arago's movements and his lighting of fires on the top of mola de l’Esclop as the activities of a spy for the invading army. Their reaction was such that he was obliged to give himself up for imprisonment in the fortress of Bellver in June 1808. On July 28 Arago escaped from the island in a fishing boat, and after an adventurous voyage he reached Algiers on August 3. From there he obtained a passage in a vessel bound for Marseille, but on August 16, just as the vessel was nearing Marseille, it fell into the hands of a Spanish corsair. With the rest the crew, Arago was taken to Roses in Catalonia, and imprisoned first in a windmill, and afterwards in a fortress, until the town fell into the hands of the French, and the prisoners were transferred to Palamós.

After three months' imprisonment, Arago and the others were released on the demand of the dey (ruler) of Algiers, and again set sail for Marseille on the November 28, but when within sight of their port they were driven back by a northerly wind to Bougie on the coast of Africa. Transport to Algiers by sea from this place would have required a delay of three months. Arago, therefore, set out over land, on what had to be a strenuous journey, guided by a Muslim imam, and reached Algiers on Christmas Day. After six months in Algiers, on June 21, 1809, Arago set sail for Marseille, where he had to undergo a monotonous and inhospitable quarantine in the lazaretto before his difficulties were over, roughly one year after he had first been imprisoned. The first letter he received, while in the lazaretto, was from Alexander von Humboldt—the origin of a scientific relationship which lasted over forty years.

In spite of the successive imprisonments, an escape, voyages, and other hardships he endured, Arago had succeeded in preserving the records of his survey; and his first act on his return home was to deposit them in the Bureau des Longitudes in Paris. As a reward for his heroic conduct in the cause of science, he was elected a member of the Académie des Sciences at the remarkably early age of twenty-three, and before the close of 1809 he was chosen by the council of the Ėcole Polytechnique to succeed Gaspard Monge in the chair of analytic geometry. At the same time he was named by the emperor one of the astronomers of the Obsérvatoire royale, which remained his residence till his death, and in this capacity he delivered his remarkably successful series of popular lectures on astronomy from 1812 to 1845. Most of Arago's later scientific contributions were in physics, particularly optics and magnetism: he discovered the phenomena of rotary magnetism (the greater sensitivity for light in the periphery of the eye) and rotary polarization, invented the first polariscope, and performed important experiments supporting the undulatory theory of light. In his capacity as secretary of the Académie des sciences, he championed the photographic process invented by Louis Daguerre, announcing its discovery to the Académie in 1839, and using his influence to obtain publicity and funding for its inventor.

Arago’s results, together with geodetic data obtained in France, England and Scotland, were published in the Recueil d’observations géodésiques, issued as a supplement to Méchain and Delambre’s work 11 years after he carried the data back to France, in 1821. Political opposition to the new system of measurement may have contributed to the unusually long delay in publication.

Besides his scientific career Arago was a politician, representing a scientific point of view, and accomplishing government projects that were culturally valuable. For a little over one month, from May 9, 1848 to June 24, 1848 he was the 25th Prime Minister of France. Arago detailed his scientific adventures in his Histoire de ma jeunesse published the year after his death, in 1854.  This was translated into English by the Rev. Baden-Powell as History of My Youth (1855). The translation was reprinted in Arago's Biographies of Distinguished Scientific Men (1859).

As a tribute to Arago’s contribution, in 1994 the Arago Association and the city of Paris commissioned a Dutch conceptual artist, Jan Dibbets to create a memorial to Arago. Dibbets came up with the idea of setting 135 bronze Arago Medallions into the ground along the Paris Meridian between the northern and southern limits of Paris: a total distance of 9.2 kilometres/5.7 miles. Each medallion is 12 cm in diameter and marked with the name ARAGO plus N and S pointers; only 121 are documented in the official guide to the medallions. One of these was shown in the film, The Da Vinci Code.

Alder, The Measure of the World (2003) pp. 7 and 294 refers to Méchain's annotated copy of this set of books in the Karpeles Manuscript Library.  In 2011, when I finished this database entry, I owned Arago's copy of the set.