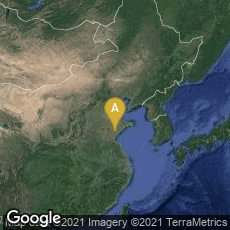 The Suanpan, A Chinese Version of the Abacus Zhao Tai Cheng herbal store in painting: Along the River During the Qingming Festival between 1085 and 1145. The Suanpan is visible in the upper right quadrant of the image.

A version of the abacus appeared in China, called suanpan in Chinese. On each rod this abacus had 2 beads on the upper deck and 5 on the lower deck.

The suanpan style of abacus is also referred to as a 2/5 abacus. The 2/5 style survived unchanged until about 1850, at which time the 1/5 (one bead on the top deck and five beads on the bottom deck) abacus appeared.

♦ "In the famous long scroll Along the River During Qing Ming Festival painted by Zhang Zeduan (1085-1145) [a native of Dongwu (present Zhucheng, Shandong)] during the Song Dynasty (960-1279), a 15 column suanpan is clearly seen lying beside an account book and doctor's prescriptions on the counter of an apothecary.

"The similarity of the Roman abacus to the Chinese one suggests that one could have inspired the other, as there is some evidence of a trade relationship between the Roman Empire and China. However, no direct connection can be demonstrated, and the similarity of the abaci may be coincidental, both ultimately arising from counting with five fingers per hand. Where the Roman model and Chinese model (like most modern Japanese) has 4 plus 1 bead per decimal place, the old version of the Chinese suanpan has 5 plus 2, allowing less challenging arithmetic algorithms, and also allowing use with a hexadecimal numeral system. Instead of running on wires as in the Chinese and Japanese models, the beads of Roman model run in grooves, presumably making arithmetic calculations much slower.

"Another possible source of the suanpan is Chinese counting rods, which operated with a decimal system but lacked the concept of a zero as a place holder. The zero was probably introduced to the Chinese in the Tang Dynasty (618-907) when travel in the Indian Ocean and the Middle East would have provided direct contact with India and Islam allowing them to acquire the concept of zero and the decimal point from Indian and Islamic merchants and mathematicians."