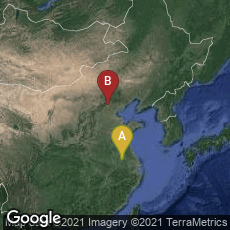 The Yongle Encyclopedia (simplified Chinese: 永乐大典; traditional Chinese: 永樂大典) literally “The Great Canon or Vast Documents of the Yongle Era”) was a Chinese compilation commissioned by the Chinese Ming Dynasty Yongle Emperor in 1403 and completed by 1408. "9169 scholars"  took part in its compilation, of which "2180 were student scholars" at Nanking (Nanjing) University, then located south of Qintian Mountain (欽天山), near Xuanwu Lake (玄武湖). Totaling 11,095 volumes, the Yongle Encyclopedia remained the world's largest general encyclopedia for many years.

"Two thousand scholars worked on the project under the direction of the Yongle Emperor (reigned 1402–1424), incorporating eight thousand texts from ancient times up to the early Ming Dynasty. They covered an array of subjects, including agriculture, art, astronomy, drama, geology, history, literature, medicine, natural sciences, religion, and technology, as well as descriptions of unusual natural events.

"The Encyclopedia, which was completed in 1408 at Nanjing Guozijian (南京國子監; the ancient Nanjing University - Nanjing Imperial Central College), comprised 22,877 or 22,937 manuscript rolls, or chapters in 11,095 volumes occupying roughly 40 cubic metres (1400 ft³) and using 50 million Chinese characters. It was designed to include all that had ever been written on the Confucian canon, history, philosophy and the arts and sciences. It was a massive collation of excerpts and works from the mass of Chinese literature and knowledge.

"Because of the vastness of the work, it could not be block-printed, and it is thought that only one other manuscript copy was made. In 1557, under the supervision of the Emperor Jiajing, the Encyclopedia was narrowly saved from being destroyed by a fire which burnt down three palaces in the Forbidden City. Afterwards, Emperor Jiajing ordered the transcription of another copy of the Encyclopedia.

"Fewer than 400 volumes of the three manuscript copies of the set survived into modern times. The original copy has disappeared from the historical record. The second copy was gradually dissipated and lost from the late-18th century onwards, until the roughly 800 volumes remaining were burnt in a fire started by Chinese forces attacking the neighboring British legation, or looted by the Eight-Nation Alliance forces during the Boxer Rebellion in 1900. The surviving volumes are in libraries and private collections around the world. The most complete of these surviving later Ming Dynasty copies of the Yongle Encyclopedia are kept at the National Library of China in Beijing" (Wikipedia article on Yongle Encyclopedia, accessed 10-26-2009).

In 2014 a two-section manuscript volume of the Yongle Encyclopedia was discovered at the Huntington Libary in San Marino, California. The volume, which dates from about 1562, is section 10,270 and 10,271 of the encyclopedia. The volume includes a part of the Book of Rites — one of the five Confucian Classics— writing attributed to Confucius’ disciples. This volume was one of only 419 surviving worldwide, and the only volume of the encyclopedia preserved in the western United States.

On January 8, 2015 Duncan Campbell posted a blog on the Huntington Verso site entitled Organizing an Encyclopedia, Chinese Style, from which I quote:

"To modern readers, one of the most fascinating elements about this work is the method used to organize such a gargantuan quantity of text—the rhyming categories of the Chinese language. In a classical Chinese world, arranging the book in this manner made perfect sense.

"Chinese is not alphabetic. The order of the entries followed a rhyming dictionary, the Hongwu zhengyun, authorized by the Yongle emperor’s father in 1375. The dictionary divided the monosyllabic sounds of the Chinese characters into 76 rhyming categories, distributed among the four tones of the spoken language. Every educated Chinese person knew the categories and their sequence by heart. Rhyme was an exceptionally effective search engine.

"For instance, our volume contains the partial text of a chapter from the Book of Rites (Li ji), one of five books constituting the revered Confucian Canon. This particular section, entitled “King Wen as Son and Heir” (Wen wang shizi), deals with how to educate a prince who was both son to the ruling emperor and heir apparent. This created complications in terms of etiquette and ritual because the son, by virtue of his relationship with his father, would also become the Son of Heaven. The last character of the title means “son” and is pronounced “zi.” Anyone looking for information on the topic of “son” would immediately go to the second of the rhyming categories in the rising tone, under the category headword meaning “paper,” pronounced “zhi,” a sound with which it rhymed. The logic of this arrangement was crystal clear to Chinese thinkers in a traditional world. In their circles, the ability to write a good poem and effective prose was vital, and rhyme was critical to both."