Final or alternate version of the Visit to the Printing Shop by Léonard de France. Musée de Grenoble. 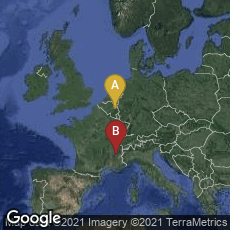 Around 2009 the Musée des Beaux-Arts de Grenoble acquired a fourth, and previously unknown panel painting of the printing shop of the Liège printer Clément Plomteux, Liège painted by the Franco-Flemish genre painter Léonard Defrance in 1782.

Defrance painted a series of four paintings depicting visits to the printing office of Clément Plomteux. Three of these remain in private hands in Liège. The fourth painting of this group, discovered by Prof. Daniel Droixhe in Paris in 2008, was acquired by the Grenoble museum.

Clément Plomteux inherited the printing office of his father in law Everard Kints, and was one of the most distinguished book printers of 18th century Liège, known for large projects, including work on the Encyclopédie méthodique. Plomteux also published pirated editions and libertarian books. On the walls of the office, as depicted in the paintings we find pamphlets advertising works by Rousseau, Voltaire, Buffon, Hélvetius, Raynal and Diderot, which were censured due to their revolutionary contents and liberal nature. In the paintings assistants with higher ranks were close to the window with direct daylight, whilst a lower ranked assistant on the far left works with a hammer to put typeset letters at the same height, and a type setter shows these activities to a group of visitors.

This painting, and the three other paintings by Defrance that depict Plomteux's shop, are illustrated in color in the online article linked to above by Daniel Droixhe, du Groupe d'étude du XVIIIe siècle de l'Université de Liège. Defrance's paintings are among the best painted records of the printing/publishing process in the late eighteenth century.

Book History from 1452 to 1797
Printing by Handpress or by Hand
Publishing
Art and Science, Medicine, Technology
Art / Art Trade