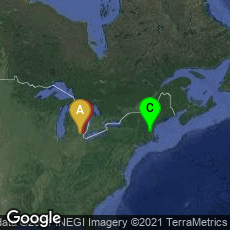 On October 19, 2009 Arbor Networks, the University of Michigan, and Merit Network presented the findings of the Internet Observatory Report at the North American Network Operators Group NANOG47 in Dearborn, Michigan:

"• The report is believed to be the largest study of global Internet traffic since the start of the commercial Internet in the mid-1990s. The report offers analysis of two years worth of detailed traffic statistics from 110 large and geographically diverse cable operators, international transit backbones, regional networks and content providers.

"• At its peak, the study monitored more than 12 terabits-per-second and a total of more than 256 exabytes of Internet traffic over the two-year life of the study.

"• Evolution of the Internet Core: Over the last five years, Internet traffic has migrated away from the traditional Internet core of 10 to 12 Tier-1 international transit providers. Today, the majority of Internet traffic by volume flows directly between large content providers, datacenter / CDNs and consumer networks. Consequently, most Tier-1 networks have evolved their business models away from IP wholesale transit to focus on broader cloud / enterprise services, content hosting and VPNs.

"• Rise of the ‘Hyper Giants’: Five years ago, Internet traffic was proportionally distributed across tens of thousands of enterprise managed web sites and servers around the world. Today, most content has increasingly migrated to a small number of very large hosting, cloud and content providers. Out of the 40,000 routed end sites in the Internet, 30 large companies – “hyper giants” like Limelight, Facebook, Google, Microsoft and YouTube – now generate and consume a disproportionate 30% of all Internet traffic.

"• Applications Migrate to the Web: Historically, Internet applications communicated across a panoply of application specific protocols and communication stacks. Today, the majority of Internet application traffic has migrated to an increasingly small number of web and video protocols, including video over web and Adobe Flash. Other mechanisms for video and application distribution like P2P (peer-to-peer) have declined dramatically in the last two years.

"• A New Internet Ecosystem: Over the last five years, macroeconomic forces have radically transformed the global Internet commercial ecosystem. Economic changes, including the collapse of wholesale IP transit and the dramatic growth in advertisement-supported service, reversed decade-old business dynamics between transit providers, consumer networks and content providers. A wave of innovation is ongoing, with service providers now offering everything from triple play services to managed security services, VPNs and increasingly, CDNs. This change in the Internet business ecosystem has significant ongoing implications for backbone engineering, design of Internet scale applications and research."