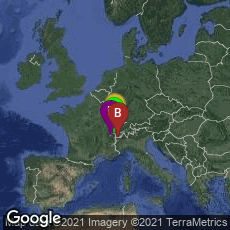 Origins of the Theory of the Ice Age; Global Cooling and Warming Although Swiss-American paleontologist-glaciologist-geologist Louis Agassiz is usually credited with originating the theory of the Ice Age, one of the primary progenitors of glacial geological theory was Swiss-German geologist Jean de Charpentier, who began studying glaciers after the Glacier de Gietroz disaster of 1818, in which a lake dammed by the glacier burst through the ice. By studying the Rhone Valley and the huge blocks of granite scattered mysteriously throughout it from the Alps to the Jura, Charpentier confirmed the theory proposed in 1821 by his friend Ignaz Venetz, that these so-called "erratic" (i.e., unconformable) blocks could only have been moved by the action of glaciers, which must have arisen after the formation of the Alps since many of the blocks were mineralogically identical to rocks found in some Alpine peaks.

Using the geological evidence he had gathered, Charpentier was able to refute other current hypotheses explaining the presence of the erratic blocks; nevertheless, when he introduced his glacier theory in a paper read before the Schweizerische Naturforschende Gesellschaft in Geneva in 1834, he was met with incredulity and scorn. In spite of the hostile reception of his ideas, Charpentier maintained his position, inviting others to come visit him and see the evidence for themselves. One of these visitors in 1836 was Agassiz.

"In the meantime, the German botanist Karl Friedrich Schimper (1803–1867) was studying mosses which were growing on erratic boulders in the alpine upland of Bavaria. He began to wonder where such masses of stone had come from. During the summer of 1835 he made some excursions to the Bavarian Alps. Schimper came to the conclusion that ice must have been the means of transport for the boulders in the alpine upland. In the winter of 1835 to 1836 he held some lectures in Munich. Schimper then assumed that there must have been global times of obliteration (“Verödungszeiten“) with a cold climate and frozen water. Schimper spent the summer months of 1836 at Devens, near Bex, in the Swiss Alps with his former university friend Louis Agassiz (1801–1873) and Jean de Charpentier. Schimper, de Charpentier and possibly Venetz convinced Agassiz that there had been a time of glaciation. During Winter 1836/7 Agassiz and Schimper developed the theory of a sequence of glaciations. They mainly drew upon the preceding works of Venetz, of de Charpentier and on their own fieldwork. . . . At the beginning of 1837 Schimper coined the term ice age (“Eiszeit“).  In July 1837 Agassiz presented their synthesis before the annual meeting of the Schweizerische Naturforschende Gesellschaft at Neuchâtel. The audience was very critical or even opposed the new theory because it contradicted the established opinions on climatic history. Most contemporary scientists thought that the earth had been gradually cooling down since its birth as a molten globe.

"In order to overcome this rejection, Agassiz embarked on geological fieldwork. He published his book Studies on Glaciers (Études sur les glaciers) in 1840. De Charpentier was put out by this as he had also been preparing a book about the glaciation of the Alps. De Charpentier felt that Agassiz should have given him precedence as it was he who had introduced Agassiz to in-depth glacial research. Besides that, Agassiz had, as a result of personal quarrels, omitted any mention of Schimper in his book. Altogether, it took several decades until the ice age theory was fully accepted. This happened on an international scale in the second half of the 1870’s" (Wikipedia article on Ice Age, accessed 11-04-2009).

In 1837 Agassiz may have been the first to propose in a formal scientific way that the Earth had been subject to a past ice age. Charpentier did not publish his Essai sur les glaciers et sur le terrain erratique du bassin du Rhone in Lausanne until 1841, a year after Agassiz published Etudes sur les glaciers in Neuchâtel. Agassiz's work, which appeared simultaneously in both French and German editions, consisting of a text volume and a splendid and visually impressive folio atlas of lithographs, undoubtedly received the lions' share of attention relative to Charpentier's more modest production.

Though Karl Schimper may also have originated the idea of glaciation, and proposed the radical idea that ice sheets had once covered much of Europe, Asia, and North America, Schimper never published his ideas. He discussed them with Louis Agassiz, who went on to appropriate the ideas as his own and, much to Schimper's and Charpentier's dismay, undeservedly received most of the credit for their origination.