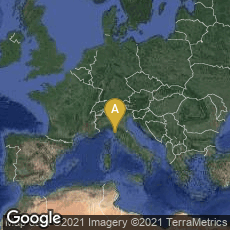 From the medieval manuscript of the Liber Abaci in the "Biblioteca Nazionale di Firenze showing (on right) the numbers of the Fibonacci sequence. The 2, 8, and 9 resemble Arabic numerals more than Eastern Arabic numerals or Indian numerals" (Wikipedia).

In 1202 Leonardo of Pisa (Leonardo Pisano) later known by his nickname Fibonacci, wrote Liber Abaci or The Book of the Abacus or The Book of Calculation. In Liber Abaci Fibonacci introduced Arabic numerals to the European public. These Fibonacci had learned while in Africa with his father who wanted him to become a merchant.

"Liber Abaci was not the first Western book to describe Arabic numerals, but by addressing tradesmen rather than academics, it was the book that convinced the public of the superiority of the new system. The first section introduces the Arabic numeral system. The second section presents examples from commerce, such as conversions of currency and measurements, and calculations of profit and interest. The third section discusses a number of mathematical problems. One example, describing the growth of a population of rabbits, was the origin of the Fibonacci sequence for which the author is most famous today. The fourth section derives approximations, both numerical and geometrical, of irrational numbers such as square roots. The book also includes Euclidean geometric proofs and a study of simultaneous linear equations."