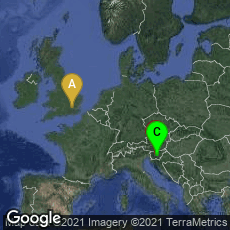 'Material Degradomics" or, The Sniff Test for a Book's Physical State In a paper entitled "Material Degradomics: On the Smell of Old Books", published in the journal Analytical Chemistry in September 2009, Matija Strlic at University College London, and associates at the Tate art museum (U.K.), the University of Ljubljana, and Morana RTD in Ivančna Gorica, (both in Slovenia) introduced a new method for linking a book’s physical state to its corresponding VOC emissions pattern. The goal was to “diagnose” decomposing historical documents noninvasively as a step toward protecting them.

“Ordinarily, traditional analytical methods are used to test paper samples that have been ripped out,” Strlic says. “The advantage of our method is that it’s nondestructive" (http://pubs.acs.org/doi/full/10.1021/ac902143z?cookieSet=1).

"The test is based on detecting the levels of volatile organic compounds. These are released by paper as it ages and produce the familiar 'old book smell'.

"The international research team, led by Matija Strlic from University College London's Centre for Sustainable Heritage, describes that smell as 'a combination of grassy notes with a tang of acids and a hint of vanilla over an underlying mustiness'.

" 'This unmistakable smell is as much part of the book as its contents,' they wrote in the journal article. Dr Strlic told BBC News that the idea for new test came from observing museum conservators as they worked.

" 'I often noticed that conservators smelled paper during their assessment,' he recalled.  'I thought, if there was a way we could smell paper and tell how degraded it is from the compounds it emits, that would be great.'

"The test does just that. It pinpoints ingredients contained within the blend of volatile compounds emanating from the paper.

"That mixture, the researchers say, 'is dependent on the original composition of the... paper substrate, applied media, and binding' " (http://news.bbc.co.uk/2/hi/science/nature/8355888.stm)