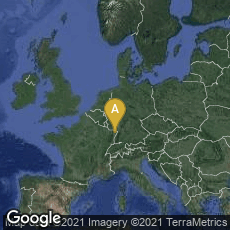 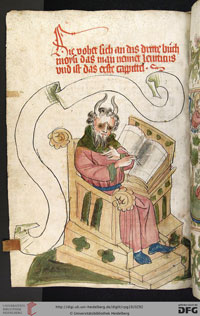 The scribe Diebold Lauber of Haguenau, Germany, who produced illuminated manuscripts of vernacular paraphrases of biblical history called "History Bibles", is thought to have employed an early form of organized "mass production" in the production of manuscripts—a kind of precursor of the "mass production" of books introduced by printing.  Around seventy examples of illuminated manuscripts produced by Lauber's shop have been identified.

"The wide assortment of products which he advertised suggests that Lauber may have kept a stock of his books. Lauber's workshop is often viewed as a precursor of a printing house, because rationalised methods of production were employed in order to reduce the costs of labour. . . . the quires are composed of individual leaves, and the text is written in simple gothic cursive letters. The text is structured by means of indices, titles and chapter headings.

"Also, the simply coloured pen illustrations drawn directly on the paper, in the most cases without a border or background, reveal a tendency towards serial production. With a limited range of artistic means, a small number of icongraphic types were used for various genres of texts. The illustrations most characteristic for Lauber's workshop were created by the painters of the so-called 'Malergruppe A', a group of artists active between 1425 and 1450. . . ." (Wagner, Als die Lettern laufen lerneten. Medienvwandel im 15. Jahrhundert [2009] No. 1).