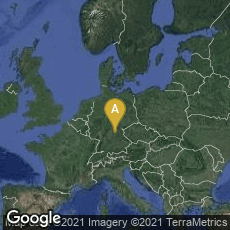 "Biblia pauperum", the First Combination of Text and Illustrations in One Printing Forme From a copy in the Bayerische Staatsbibliothek.

Printing the Biblia pauperum, a kind of illustrated précis of highlights in the Bible— intended for laymen or lower clergy who could not afford a complete Bible— represented a major technical challenge in the integration of the relatively brief text with the numerous woodcuts on each page. In spite of these difficulties, the first printed edition may have employed movable type.

The Incunabula Short Title Catalogue lists ten editions of the Biblia pauperum printed during the 15th century. The earliest of these are three editions issued in Bamberg by Albrecht Pfister, two of which are estimated to have been printed in 1462, one in German and the other in Latin, and another Latin edition in 1463: ISTC  nos. ib00652700, ib00652750, ib00652800.

In November 2013 a digital facsimile of ib00652750 was available from the Bayerische Staatsbibliothek, München website at this link.

"The first woodcuts used to illustrate copies of the 'Biblia pauperum' printed with movable types were not produced in Mainz, where printing was first practised, but rather, using types from Mainz, in Bamberg in the printing workshop of Albrecht Pfister. Since 1460, Pfister had his printed editions illustrated with woodcuts. Initially, the integration of pictures in printed text proved to be a difficult task. . . . His edition of the 'Biblia pauperum' for the first time combined text and illustrations in one printing forme.

"Even after Pfister's edition was published, the 'Biblia pauperum' continued to be produced as a blockbook, which also allowed the combination of woodcuts with printed text. In the production of illustrated books for religious edification or for practical purposes which had previously been copied by hand, woodcuts successfully came to replace pen drawings. . . ." (Wagner, Als die Lettern laufen lernten. Medienwandel im 15. Jahrhundert [2009] no. 6).