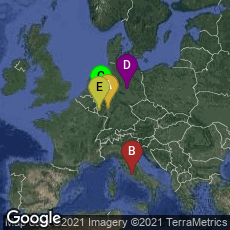 In 1501, highly controversial Pope Alexander VI (Roderic Llançol, later Roderic de Borja i Borja, Italian: Rodrigo Borgia) published his bull, Inter Multiplices. In this bull Alexander confirmed that an ecclesiastical imprimatur was necessary before print publication would be allowed. Archbishops, especially those of Cologne, Magdeburg, Trier, and Mainz were to prohibit, under pain of excommunication (latae sententiae), the printing of books in their provinces without their imprimatur, which was to be granted gratis. Secondly, the censorial powers of the Archbishops could be delegated to local authorities. Thirdly, the scope of the censorship was confined to questions of what is orthodoxae fidei contrarium; questions of public or private morality were apparently not included. The jurisdiction extended over corporations, universities and colleges. If necessary the civil powers could be invoked, and in order to motivate the local authorities, they were to receive half of the monetary penalties collected.

"The art of printing can be of great service in so far as it furthers the circulation of useful and tested books; but it can bring about serious evils if it is permitted to widen the influence of perncious works. It will, therefore, be necessary to maintain full control over the printers so that they may be prevented from bringing into print writings which are antagonistic to the Catholic faith, or which are likely to cause trouble to believers" (Green & Karolides, Encyclopedia of Censorship [2014] 280.