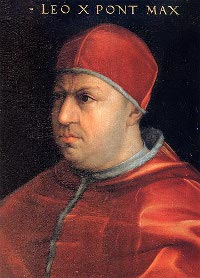 The most stringent censorship decree antedating the Reformation was the Papal bull Inter Solicitudines issued by Pope Leo X following the May 4, 1515 session of the Fifth Lateran Council.

"It may have been under the influence of the Reuchlin controversy (and now not directed against any particular territory or town) that Leo X ordered censorship to be applied to all translations from Hebrew, Greek, Arabic and Chaldaic into Latin, and from Latin into the verancular. The regulations were to be enforced by bishops, their delegates or the inquisitores haereticae pravitatis. The decree bemoaned the fact that readers were supplied by printers with books 'which not only fail to edify, but promote errors in faith as well as in daily life and the mores.' The Pope saw acute danger that the evil 'may grow from day to day' (as indeed it did). By 1515 the reading of 'dangerous' texts had apparently reached dimensions which, in the eyes of the established church, posed a real threat to orthodoxy. Censorship before the Reformation may seem tame compared with its subsequent development. But we should not emphasize unduly the effect of the Reformation. Without the spread of print and reading stern censorship would not have been necessary. Moreover, without this spread, the Lutheran Reformation might well have failed.

"Nobody will ever know how many texts planned and actually produced failed to survive due to confiscation. i believe that the great majority of Lutheran, Zwinglian and Calvinist writings, against which so many regulations were directed, managed to survive, largely because they were published in sizable editions and frequently republished. Even if all copies of one edition were suppressed, the text still had a fair chance to survive in another issue. Complete loss is most likely to have occurred among the works of the so-call 'Left,' the writings of the revolutionary reformers, hated with equal fervor by the Catholic hierarchy and their more conservative fellow reformers. Censorship retarded here and there the spread of ideas; whether it ever successfully extinguished any idea completely is doubtful. Censorship during the XVIth century may have helped in keeping disputed ideas with the fold of one denomination or the other. It certainly limited the publication of protestant publications in catholic, and of catholic in protestant territories; thus strengthening the barriers erected against the free flow of ideas; but controversial pamphlets were peddled far afield, and unwelcome idease spread, of course, also by word of mouth" (Hirsch, Printing, Selling and Reading 1450-1550 [1967] 90).