Image Source: en.wikipedia.org
The Oriental Institute Prism. The text inscribed on this prism was translated by Daniel David Luckenbill as The Annals of Sennacherib, Chicago: University of Chicago Press, 1924. 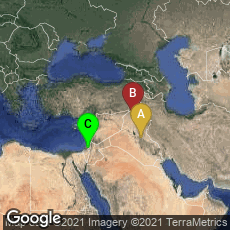 Image Source: www.britishmuseum.org
Hexagonal clay prism, foundation record lists campaigns of Sennacherib until the start of his final war against Babylon, and includes a description of the tribute received from Hezekiah, King of Judah in 701 BC; 82 + 83 + 82 + 80 + 85 + 75 lines of inscription. British Museum 91032. Height: 38.10 centimetresWidth: 8.57 centimetres (faces)Width: 16.51 centimetres (max)

The Taylor Prism, a six-sided baked clay document (or prism) was discovered at the Assyrian capital Nineveh, in an area known today as Nebi Yunus, now Iraq. It was acquired by Colonel R. Taylor, British Consul General at Baghdad, in 1830, after whom it is named. The British Museum purchased it from Taylor's widow in 1855. The Taylor Prism contains the text of Sennacherib's Annals, the annals of the Assyrian king Sennacherib. They are found inscribed on a number of artifacts; the final versions were found in three clay prisms inscribed with the same text: the Taylor Prism in the British Museum, the Oriental Institute Prism in the Oriental Institute of Chicago, and the Jerusalem Prism in the Israel Museum in Jerusalem.

One of the first major Assyrian documents discovered, the Taylor Prism played an important part in the decipherment of cuneiform script.

"The prism is a foundation record, intended to preserve King Sennacherib's achievements for posterity and the gods. The record of his account of his third campaign (701 BC) is particularly interesting to scholars. It involved the destruction of forty-six cities of the state of Judah and the deportation of 200,150 people. Hezekiah, king of Judah, is said to have sent tribute to Sennacherib. This event is described from another point of view in the Old Testament books of 2 Kings and Isaiah. Interestingly, the text on the prism makes no mention of the siege of Lachish which took place during the same campaign and is illustrated in a series of panels from Sennacherib's palace at Nineveh" (http://www.britishmuseum.org/explore/highlights/highlight_objects/me/t/the_taylor_prism.aspx, accessed 12-26-2009).

The three known complete examples of this inscription are nearly identical, with only minor variants, although the dates on the prisms show that they were written sixteen months apart (the Taylor and Jerusalem Prisms in 691 BC and the Oriental Institute prism in 689 BC). There are also at least eight other fragmentary prisms preserving parts of this text, all in the British Museum, and most of them containing just a few lines.

"Though we possess three impressive copies of the final edition of Sennacherib’s annals (the Taylor, Jerusalem, and Oriental Institute Prisms), none was found in scientifically conducted excavations and the precise circumstances of their discoveries remain unknown. Fortunately, there are internal clues that help us determine their place of origin. Sennacherib’s prisms generally fall into two types- octagonal and hexagonal. There appears to be a connection between their shape and place of origin. At the end of the octagonal inscriptions in the building accounts, there is a description of the construction of the “Palace without Rival.” But, in the hexagonal prisms, the inscriptions end with the building of the Nebi Yunis arsenal. Because these three prisms are hexagonal, we may assume that they had been originally deposited in the arsenal’s foundations. The Taylor Prism came into the possession of Colonel John Taylor, a British diplomat and antiquarian, at Mosul in 1830. It was acquired by the British Museum from his widow in 1855. The Oriental Institute Prism was acquired by the Oriental Institute of the University of Chicago in 1920 and quickly supplanted the Taylor Prism as the standard version of the annals of Sennacherib. The Jerusalem Prism was acquired by the Israel Museum at a Sotheby’s auction in 1970" (http://cojs.org/hezekiah-s_defeat-_the_annals_of_sennacherib_on_the_taylor-_jerusalem-_and_oriental_institute_prisms-_700_bce/, accessed 9-2020).