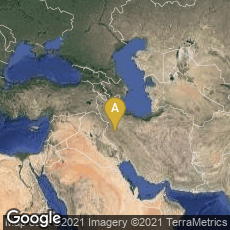 The Behistun Inscription, the "Rosetta Stone" of Cuneiform Script Behistun inscription and reliefs from a distance.

The Behistun Inscription (also Bisitun or Bisutun, Modern Persian: بیستون ; Old Persian: Bagastana, meaning "the god's place or land"), a multi-lingual stone inscription approximately 15 meters high and 25 meters wide, located on Mount Behistun in  Kermanshah Province, near the city of Kermanshah in western Iran, was written by Darius I, the Great sometime between his coronation as Zoroastrian king of kings of the Achaemenid, or Persian, Empire in the summer of 522 BCE and his death in autumn of 486 BCE.

" . . . the inscription begins with a brief autobiography of Darius I, the Great including his ancestry, lineage etc. Later in the inscription, Darius provides a lengthy sequence of events following the death of Cyrus the Great and Cambyses II in which he fought nineteen battles in a period of one year (ending in December of 521 BC) to put down multiple rebellions throughout the Persian Empire. Darius' inscription states in detail that the rebellions, which had resulted from the deaths of Cyrus the Great and his son Cambyses II, were orchestrated by several impostors and their co-conspirators in various cities throughout the empire, each of whom falsely proclaimed kinghood during the upheaval following Cyrus the Great's death. Darius the Great proclaimed himself victorious in all battles during the period of upheaval, attributing his success to the "grace of Ahuramazda (God)".

"The inscription includes three versions of the same text, written in three different cuneiform script languages: Old Persian, Elamite, and Babylonian. Babylonian was a later form of Akkadian: unlike Old Persian, they are Semitic languages. In effect, then, the inscription is to cuneiform what the Rosetta Stone is to Egyptian hieroglyphs: the document most crucial in the decipherment of a previously lost script.

"Translation of the text was a multi-step and multi-national effort based on earlier work done on the decipherment of the Old Persian script by Georg Friedrich Grotefend in the late 1700's when Grotefend discovered that, unlike Elamite and Babylonian texts, Old Persian text is alphabetic. In the following years, the efforts of [Eugène] Burnouf, [Christian] Lassen, and [Henry] Rawlinson (who had the remainder of the inscription transcribed in two parts, in 1835 and 1843) contributed to translating the Old Persian cuneiform text using the Zoroastrian book Avesta as a key, in addition to cross referencing with modern Persian and Vedic languages. With the Old Persian text deciphered, Rawlinson and others were able to then translate the Elamite and Babylonian texts (both of which were ancient translations of the Old Persian text) after 1843.

"The Inscription is . . . 100 metres up a limestone cliff from an ancient road connecting the capitals of Babylonia and Media (Babylon and Ecbatana, respectively). The mountainside was removed to make the inscription more visible after its completion. The Old Persian text contains 414 lines in five columns; the Elamite text includes 593 lines in eight columns, and the Babylonian text is in 112 lines. The inscription was illustrated by a life-sized bas-relief of Darius I, the Great, holding a bow as a sign of kingship, with his left foot on the chest of a figure lying on his back before him. The prostrate figure is reputed to be the pretender Gaumata. Darius is attended to the left by two servants, and ten one-metre figures stand to the right, with hands tied and rope around their necks, representing conquered peoples. Faravahar floats above, giving his blessing to the king" (Wikipedia article on Behistun Inscription, accessed 12-27-2009).