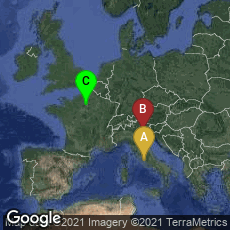 The Transition from Latin to Vernaculars in the 16th Century

"The well defined traditional groups of readers knew Latin, and many read it with ease and better than their own mother tongue. Books in the vernacular languages were for 'every man, as well rude as learned,' and the student of literacy and literary taste must be as much concerned with the 'rude' as with the learned. Latin, the language of the educated, was the international language throughout the Middle Ages; this fact is reflected by the book production. Slightly more than three-fourths of surviving incunables are in Latin, the rest in different verancular languages. Throughout the XVIth century the percentage of books in the verancular increased, caused in part by the mounting concern of authors, printers and publishers with the 'rude' (men, women and children who were able or willing to read books in their own tongue, but not in Latin). It is also true that the importance of Latin as the language of communication among the learned declined, in spite of the revival of learning and increased concern with the classics and their style. Already during the first half of the XVIth century books in Latin and those in the vernacular languages were much more evenly distributed, and by the end of the XVIth century the latter accounted probably for more than half of the total production. Latin had lost its international character except among the clergy (of the Catholic Church), a coterie of Neo-Latin writers, and limited groups of scholars and professionals. National languages had won the battle. The favorable reception of books in the mother tongue was only one of several causes. Political and religious ferment of this period involved an ever increasing number of persons. In order to reach the largest possible number, the leaders and the propagandists turned more and more to the vernacular. A third factor was the changing attitude of the educated towards their own native language" (Hirsch, Printing, Selling, Reading 1450-1550 [1967] 132).