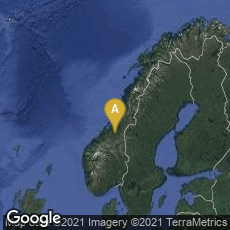 In 1987 Norwegian engineer Torleiv Maseng, project leader at SINTEF, Trondheim, Norway, and Odd Trandem developed the technology that became accepted as the Global System for Mobil communications (GSM). Maseng's work "included the use of channel estimation and the combination of equalization, error correcting codes and modulation in which the Viterbi algorithm was used by all components" (Wikipedia article on Torleiv Maseng, accessed 12-29-2009).

" 'The most important reason we prevailed was that our system was the best in handling the interference created when radio signals are reflected by buildings and topography,' Mr. Maseng says.

“ 'As the number of reflected signals increases, there is a greater chance that the radio transmitter or receiver gets confused and mixes up the signals. Norway has an abundance of those kinds of natural topographic challenges.'

"A central concept in understanding how the system works is bandwidth. Bandwidth can be compared with the speed at which people talk. In this analogy, the faster you talk, the higher the bandwidth. But high bandwidth can be a problem in places with lots of reflected signals. The same problem explains why most hymns are sung slowly in church. If they are sung quickly, the acoustics of the church turn the hymn into an unintelligible mess.

"This phenomenon also confounds radio signals. But Mr. Maseng and Mr. Trandem came up with a clever solution. The problem is that if the data speed is too high, the receiving equipment cannot deal with signals that ‘hang in the air’ at the same time, and the signal becomes chaotic. But if the bandwidth is too low, there is a greater chance that the signal will disappear because the receiving equipment cannot distinguish between different echoes.

"Maseng and Trandem altered their bandwidth during testing; they could do this because they devised a way to see their results in real time. By doing this they were able to find the optimal bandwidth between the two extremes. Their competitors could not. The two researchers were clever, but they also had a powerful tool to help them: A Cray supercomputer, purchased by NTNU’s predecessor, NTH, in 1986. “The computing power of the Cray was a great help in finding the optimal bandwidth,” Odd Trandem says" (http://www.ntnu.no/gemini/2005-01e/gsm.htm, accessed 12-29-2009).