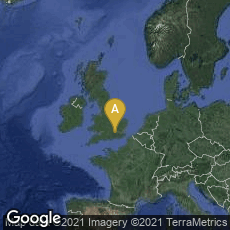 British Library Cotton MS August II.106. This is one of 4 surviving original copies of the charter sent out in 1215. 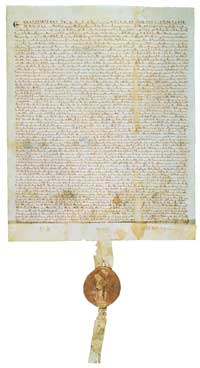 In January 1215 a group of English barons demanded a charter of liberties and protection against arbitrary behavior by King John. Receiving no satisfaction, in May the barons took up up arms and captured London. To resolve the dispute on June 10 both parties met and held negotiations at Runnymede, a meadow by the River Thames. Concessions made by King John were outlined in a document known as the "Articles of the Barons", to which the King's great seal was attached, and on June 19 the barons renewed their oaths of allegiance to the King. At the same time the royal chancery produced a formal royal grant, based on the agreements reached at Runnymede, which became known as Magna Carta (Great Charter).

According to contemporary chronicles, copies were sent out from the royal chancery to bishops, sheriffs and others throughout the land; however, the exact number of copies distributed is unknown. Four copies of the original Magna Carta grant survive: two from the library of Sir Robert Bruce Cotton are preserved in the British Library., and others in the archives of Lincoln Cathedral and Salisbury Cathedral. On February 2, 2015 all four of the original copies of the Magna Carta were united for the first time for an exhibition at the British Library.

In 1217 the Magna Carta was officially published with changes and distributed throughout the kingdom. Of those published copies 17 survive, of which 4 are preserved in the Bodleian Library Oxford:

The original text of Magna Carta was first printed from one of the Cottonian copies roughly 500 years later, in 1733, perhaps to safeguard the text. In 1731 one of Cotton's copies had been damaged in a fire which destroyed other manuscripts from Cotton's library then stored at Ashburnham House. The first edition of 1733 was engraved and printed on vellum as a facsimile of the original by John Pine, an engraver and publisher of prints and illustrated books.

In July 2014 a virtual copy of Magna Carta was available from the British Library at this link.