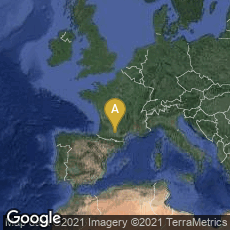 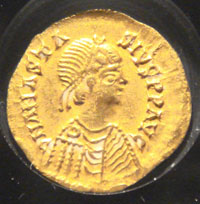 The Breviarum Alarici (Breviary of Alaric, Breviarium Alaricianum or Lex Romana Visigothorum), written in southern France in the sixth century, is one of the earliest surviving manuscript codices of Roman law. The text was compiled by order of Alaric II, King of the Visigoths, with the advice of his bishops and nobles, in 506, the twenty-second year of his reign. The codex is preserved in the Bayerische Staatsbibliothek.

"It applied, not to the Visigothic nobles under their own law, which had been formulated by Euric, but to the Hispano-Roman and Gallo-Roman population, living under Visigoth rule south of the Loire and, in Book 16, to the members of the Trinitarian Catholic Church. (The Visigoths were Arian and maintained their own clergy.)

◊"thirteen titles of the Gregorian code;

◊"and a fragment of the first book of the Responsa Papiniani" (Wikipedia article on Breviary of Alaric, accessed 01-03-2010).

A digital facsimile of the codex (CLM 22501) is available from the Bayerische Staatsbibliothek at this link.