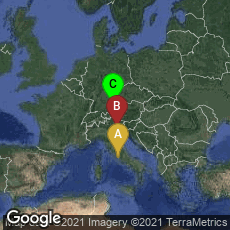 A portrait of Albreccht V, Duke of Bavaria by Hans Mielich, 16th century.

In 1558 Albrecht V, Duke of Bavaria acquired the library of the humanist, orientalist, philologist, and theologian, Johann Albrecht Widmannstetter. This was the origin of the Bayerische Staatsbibliothek, München.

"Like an American millionaire of the Gilded Age, he bought whole collections in Rome and Venice; in Venice, after tiresome drawn-out negotiations with the aged Andrea Loredan, he purchased the Loredan collection virtually in its entirety: 120 bronzes, 2480 medals and coins, 91 marble heads, 43 marble statues, 33 reliefs and 14 various curiosities, for the sum of 7000 ducats; 'they were all exported from Venice secretly at night in large chests'. At the same time, squabbles among the heirs of Gabriele Vendramin thwarted him in his attempt to purchase the single most important collection in Venice and paintings and antiquities, drawings by the masters and ancient coins. To house his antiquities he commissioned the Antiquarium in the Munich Residenz, the largest Renaissance hall north of the Alps.

"He appointed Orlando di Lasso to a court post and patronized many other artists; this led to a huge burden of debts (½ Mio. Fl.)" (Wikipedia article on Albert V, Duke of Bavaria, accessed 01-03-2010).