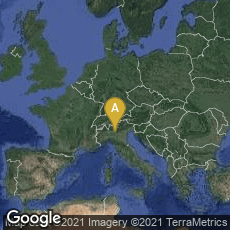 "Bellicorum instrumentorum liber," One of the Earliest Surviving Italian Manuscripts on Technology and War Machines 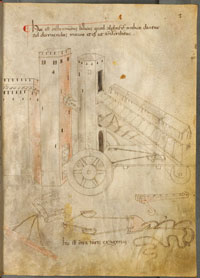 Fontana accompanied each of his roughly 140 illustrations of siege engines, fountains and pumps, lifting and transporting machines, defensive towers, dredges, combination locks, battering rams, a "rocket-powered" craft, the first ever depiction of the magic lantern, scaling ladders, alchemical furnaces, clockwork, robotic automata, and measuring instruments with a caption that was partially encoded with a substitute cypher system. A digital facsimile is available from Bayerische Staatsbibliothek at this link.

"The entire manuscript, excepting the table of contents, title and concluding formula is in cipher; this consists  almost entirely of straight lines and circles. Abbreviation marks are  placed under the script. . . .

"where one sees several projects of combiantorial machines, concentric disks, cylinders, rolls that allow the permutation of isolated elements of writing (letters or words): and engineer's realization of the Lullian dream. However the connection between the theater in the first book and the devices of the second is not one of mere juxtaposition: the Secretum is actually a treatise of mnemotechnics, or, as Battisti put it, "the blueprint for a compact database of the mind (http://www.voynich.net/Arch/2002/09/msg00136.html, accessed 01-16-2010).