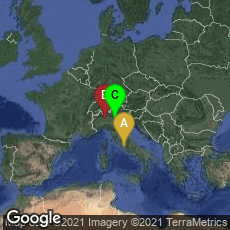 Coin depicting Flavius Theodoricus (Theodoric the Great). Roman Vassal and King of the Ostrogoths. This coin, from the collection of King Victor Emmanuel III of Italy, is the only example known. It is now in Palazzo Massimo, Rome. This highly stylized coin may be among the only reliable surviving portraits of Theodoric.

"There is a tendency to write about ancient literature and late antique manuscripts as if they vanished, all at once, in the chaotic centuries often called the Dark Ages—to see the history of transmission in this period largely in terms of large-scale physical destruction. Such a picture is slightly out of focus. Yes, the period AD 400-600 saw a great deal of destruction; but then, destruction from fire and the elements was not new to Roman history. The exceptional element was that the production of new manuscripts ceased; the market for new books rapidly diminished and, once the market dried up, the means of production disappeared. This was not so much a result of the physical destruction of either the readers or the bookshops, but rather because the traditional audience, namely the Roman senatorial class, within a couple of centuries dwindled in size and recycled itself as an ecclesiastical class with its own, albeit small, means of producing manuscripts.

"Lack of production, of course, does not equal lack of use—in many respects, quite the opposite. The newly emerging societies cherished Roman coins, and clipped them to make the smaller denominations appropriate to their greatly reduced money economy, since they did not mint large quantities of precious metals of their own. In similar fashion, Roman books whether papyrus or parchment continued to serve the needs of the shrinking literate class—not new books, but the enormous residue of the antique book trade that reposed in public and private libraries. These slowly gravitated to ecclesiastical libraries (locus of the new literate class), to be sent north with the missionaries. Benedict Biscop, for example, had no difficulty finding books to carry north to Norhumbria when he visited Rome in the 670s; but these were old books, already a century or two older than he.

"What is remarkable is the length of time that Christian Rome and its infrastructure endured. As we have suggested, Roman civilization, centred on the city, the forum, and the public baths, which was once thought to have been destroyed by the Visigoths and Ostrogoths who sacked Rome in the course of the fifth century, is now generally recognized as having remained, though undeniably altered, reasonably intact until the middle of the sixth century; indeed, the external trappings of this civilization were gladly appropriated by the Ostrogothic kindom of Theodoric (475-527), whom both Boethius and Cassiodorus served. The physical devastation of Roman Italy occurred, ironically, through the reassertion of imperial power—the reappearance in 540 of Byzantine armies in Italy under the emperor Justinian's general Belisarius. Rome changed hands five times in these campaigns.

"What survived Belisarius' legions fell to the Lombards, the last of the tribal groups to move into Italy. Any city, such as Milan, that opposed the Lombard advance was razed; those like Verona that opened their gates survived unharmed. It is no wonder, then, that little of ancient Milan, city of Ambrose, survived—or, conversely, that Petrarch in the fourteenth century could find what was probably a late antique manuscript of Cicero's letters to Atticus in Verona. Remarkably, the Roman aqueducts still functioned in the time of Pope Gregory I (pope 590-604); but gradually the Roman ruling class was replaced or absorbed by Lombard (or, in Gaul, by Frankish) peoples who had little need, or even less ability, to maintain the physical infrastructure of Roman civilization: the forum, public baths, roads, libraries, temples. As they became unnecessary, they were increasingly neglected. Eventually they served the only useful purpose left to them, becoming the quarries that provided the cut stone from which early medieval basilicas and royal palaces were built" (Rouse," The Transmission of the Texts," Jenkyns (ed) The Legacy of Rome: A New Appraisal [1992] 44-45). [As usual, the links are my addition.]