Diagram translated by Benjamin Heller ([email protected]) of the University of Michigan and designed by Marketa Kubacakova. 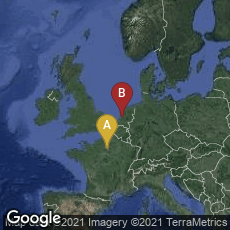 Diderot & d'Alembert's Encyclopédie, the Central Enterprise of the French Enlightenment "Figurative system of human knowledge", the structure in which the Encyclopédie organized knowledge. It had three main branches: memory, reason, and imagination.

Between 1751 and 1780 French philosopher, art critic, and writer Denis Diderot and French mathematician, mechanician, physicist and philosopher Jean le Rond d'Alembert edited and wrote portions of the Encyclopédie ou dictionnaire des sciences, des arts et des métiers, par une société‚ de gens de lettres in 17 folio volumes of text plus 11 folio volumes (i.e., 10 volumes in 11) of plates. The first 7 volumes were published in Paris, but volumes 8 to 17 had to be published under a false Neuchâtel imprint. The main work appeared between 1751 and 1772. A supplement of 4 volumes plus one plate volume was published in Paris and Amsterdam from 1776 to 1777. The Table analytique et raisonnée for the set was published in 2 folio volumes in Paris and Amsterdam in 1780. Altogether there were 35 volumes, with 71,818 articles, and 3,129 plates.

The central enterprise of the French Enlightenment, the Encyclopédie embodied that movement's liberal, anti-clerical and scientific spirit, its preoccupation with man as a creature of nature, and its conception of culture and society as mutable products of the evolutionary processes of history. As such, the work challenged the twin authorities of the French monarchy and the Catholic Church, both of which derived their power from the traditional belief in a divinely ordained, unchanging order. Well aware of the dangers of affronting such powerful authorities, the philosophes who contributed to the Encyclopédie relied heavily on irony and subterfuge in their attacks on the established order, but the epistemological basis of these attacks was clearly stated in the Encyclopédie's "Discourse préliminaire," written by d'Alembert, who, "although he formally acknowledged the authority of the church, . . . made it clear that knowledge came from the senses and not from Rome or Revelation" (Darnton, The Business of Enlightenment: A Publishing History of the Encyclopédie 1775-1800 [1979] 7).

The first seven volumes of the Encyclopédie were produced in relative safety, due in part to the support of powerful protectors, notably Madame de Pompadour, but official tolerance came to an end in 1759, when the Encyclopédie was condemned by the Parlement of Paris and placed on the Index librorum prohibitorum by Pope Clement XIII. Diderot was forced to complete the remaining ten volumes in secret and to publish them under a false Neuchâtel imprint.  "In truth, secular authorities did not want to disrupt the commercial enterprise, which employed hundreds of people. To appease the church and other enemies of the project, the authorities had officially banned the enterprise, but they turned a blind eye to its continued existence" (Wikipedia).

A high percentage of the Encyclopédie's 71,818 articles were written by Diderot and d'Alembert themselves, with another large portion, about 400 articles, written by the Baron d'Holbach. Other famous contributors included Jean-Jacques Rousseau and Voltaire. The most prolific contributor was the French scholar Louis de Jaucourt who wrote 17,266 articles, or about 8 per day between 1759 and 1765.   Altogether 140 people contributed articles to the project.

The Encyclopédie was a considerable commercial success, resulting in a print run of 4250 copies (Wikipedia), much larger than the typical print run of most publications at the time.

The discussion and exposition of printing in the Encyclopédie is among the most significant of the 18th century. Of this Giles Barber wrote in French Letterpress Printing (1969)9-10:

"The Encyclopédie provides one of the best general explanations of printing of the century, being both detailed and accurate. The main article is well supported by a host of minor ones including numerous definitions of terms and processes and by an excellent and evocative series of plates showing general workshop scenes as well as details of presses and other equipment. The authorship of all these articles is not, as yet ascertained. In their Preface the editors say: 'On juge bien que sur ce qui concerne l'Imprimerie et la Librairie, les memes tous les secours qui'il nos était possible de désirer'. In addition two of the publishers are credited with particular articles, David l'ainé with 'catalogue" (based on a manuscript by the abbé Girard bequeathed to Le Breton) and Le Breton himself with 'encre noire'. The technical part of the long and important article on 'imprimerie' is ascribed to the prote in Le Breton's shop, who we learn from the article 'prote', also ascribed to him, was one Brullé. J.B.M. Paillon, the famous engraver, wrote a number of minor articles on engraving ('dentelle, dorure sur parchemen, fleuron') and provided notes for others. Pierre Simon Fournier, the type founder, is similarly thanked in the Préface for providing background notes on his trade. "Papeterie' is by L. J. Goussier, one of the regular contributors, assisted by 'M. Prevost de Langlée près de Montargis'.

"Of the chief editors we know that d'Alembert wrote 'bibliomanie' and that Diderot's editorial asterisk, indicating his responsibility for either part or all of the article, occurs before 'bibliothécaire', caractère de'imprimerie (doubtless basically written by Fournier), chassis, corps, correcteur' and a few other minor subjects. But the chief editor as far as printing was concerned was undoubtedly the Protestant chevalier Louis de Jaucourt. Among his more important contributions were parts of 'imprimerie' covering 'histoire des inventions modernes' and 'imprimerie de Contantinople', the historical part of 'papier' and the articles on 'privilege d'impression' and 'relieur' as well as a large number of short ones.  It has also bee suggested the printer Claude François Simon wrote many of the printing articles but no internal confirmation of this has been found."

♦ Charles C. Gillespie reproduced 485 of the most notable plates in the Encyclopédie with informative and entertaining commentary in A Diderot Pictorial Encylopedia of Trades and Industry (2 vols. 1959). These included all or most of the plates concerning book production (papermaking, printing, copperplate engraving, bookbinding, leather production).

♦ Lough, Essays on the Encyclopédie of Diderot and d'Alembert (1968) provided an authoritative bibliographical study and identified the authors of a significant percentage of the unsigned articles.

♦ There are numerous versions of the Encyclopédie online. The ARTFL Encyclopédie Database from the University of Chicago contains "20.8 million words, 400,000 unique forms, 18,000 pages of text, 17 volumes of articles, and 11 volumes of plate legends."

♦ For an English translation there is the Encyclopedia of Diderot and d'Alembert Collaborative Translation Project at the University of Michigan. When I checked in 2013 significant portions of the Encyclopédie had been tranlsated.

♦ In February 2014 the full text of the first edition of the Encyclopédie was available from the French Wikipedia at this link. As I searched through the text Google Chrome provided a machine translation.