Alexander Minuziano's appendix explaining the resolution of the copyright issues in this case. 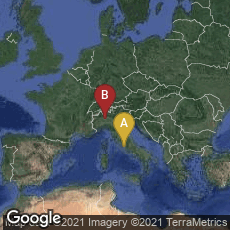 Alessandro's unauthorized reprint or piracy of the first complete edition of the Annales, Historiae and other writings of Tacitus.

The story began in 1508 when Pope Leo X, formerly Cardinal Giovanni de' Medici, had the opportunity to purchase a manuscript of the "lost" first books of Tactitus's Annals. The manuscript had been stolen from the monastery of Corvey in Westphalia, but that did not deter a passionate collector. Wishing to share his collecting discovery with the world, on November 14, 1514 Leo granted Beroaldo the exclusive right or privilegio for printing the text. Violators of the privilegio were threatened with excommunication.  Beroaldo's edition was the first to include Books I-VI of the Annals, and also the first to include the "Annotationes" of the jurist and legal humanist Andrea Alciato (Alciati, Andreas Alciatus).

"According to the well-known story, the codex containing the six books by Tacitus (the so-called 'Mediceo primo" [Laurentianus Mediceus 68.1] had been stolen from the monastery of Corvey in Westphalia. In 1508 it was in the hands of Francesco Soderini from whom it was acquired by Cardinal Giovanini de' Medici (the future Leo X). In 1515, after becoming pope, Leo X granted Beroaldo the exclusive rights to the printing of the book. One of the printed books Leo sent to the Abbey of Corvey, together with a plenary indulgence, as a replacement for the 'borrowed' manuscript. Much to the annoyance of Leo X, the Milanese scholar and publisher Alessandro Minuziano ignored the  paper privilegio and reprinted Beroaldo's edition of Tacitus word-for-word. Minuziano was duly summoned to Rome to answer directly to the Pope. His detailed apology, however, appeased Leo X's anger and, with a papal letter of absolution, Minuziano was permitted to publish the work, provided he came to terms with Filippo Beroaldo" (Witcombe, Copyright in the Renaissance: Prints and the Privilegio in Sixteenth-Century Venice and Rome (2004) 48-49).

Landau and Parshall, The Renaissance Print 1470-1550 (1994) 301-02 point out that Minuziano attempted to skirt the privilegio in a clever way, which involved illegal cooperation with someone working in the printing office of Stephanus Guilleretus de Lotheringia in Rome:

"In the meantime in Rome the issue of privileges had suddenly been brought to the attention of Leo X when it was discovered in 1515 that the Milanese publisher Alessandro Minuziano had found a loophole in the privilege granted to Filippo Beroaldo for his Storie. Minuziano did not copy the whole book once it had appeared, but page after page (obtained illegally) while it was being printed. The main reason the Pope was so exceeding angry was that he had paid the vast sum of 500 ducats for the manuscript. . . ."

Because he was copying the Rome edition as fast as it was being printed we may presume that Minuziano intended to issue his pirated edition almost simultaneously with the 1515 Rome edition. However his scheme was found out, and the dispute over the privilegio forced Minuziano to suspend publication until the matter was resolved. The matter was serious, especially as Leo X actively involved himself in issues of publication and censorship. Because the case was eventually resolved in Minuziano's favor, he added an appendix to the edition containing the key documents pertaining to the case. These included the papal privilege of November 14, 1514, Minuziano's “supplication and prayers” to Leo X of March 30, 1516, defending himself, remarkably, by claiming ignorance of the Pope’s privilegio, pleading for absolution and to be allowed to finish his edition, and the papal letter of pardon dated September 7, 1516, reiterating Minuziano’s defense, and granting Minuziano permission to publish his edition.