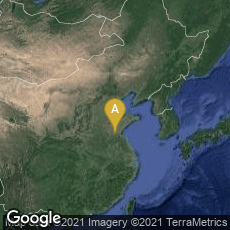 Fragments of The Art of War as recorded in some of the Yinqueshan Han Slips.

About 550 BCE it is believed that the Chinese general and military strategist Sun Wu ( 孙武, 孫武, Sūn Wǔ), style name Changqing (長卿), better known as Sun Tzu (孙子, 孫子, Sūn Zǐ]) wrote The Art of War (孫子兵法; Sūn Zǐ Bīng Fǎ). Later called one of the Seven Military Classics of ancient China, The Art of War is the oldest and most influential work on military strategy.

"Sun Tzu suggested the importance of positioning in strategy and that position is affected both by objective conditions in the physical environment and the subjective opinions of competitive actors in that environment. He thought that strategy was not planning in the sense of working through an established list, but rather that it requires quick and appropriate responses to changing conditions. Planning works in a controlled environment, but in a changing environment, competing plans collide, creating unexpected situations" (Wikipedia article on The Art of War, accessed 01-30-2010).

Sun Tzu's work was first published in a European language in the French translation of French Jesuit in China Jean Joseph Marie Amiot as Art militaire des Chinois, ou recueil d'ancients traités sur la guerre ... on y a joint dix préceptes addressés aux troupes parl'Empereur Young-Techeng (Paris, 1772). That edition was illustrated with 33 plates. The text was first translated into English by British officer Everard Ferguson Calthrop in 1905, and by Andrew Giles in 1910. Since then there have been many different English translations. In French translation the work probably influenced Napoleon. Since then it has continued to influence military and political leaders of many nationalities, and its precepts have also been applied to business and managerial strategies.

Because of the destruction of information that took place in 213 BCE at the instigation of the Qin Emperor, the earliest known manuscript of Sun Tzu's text consists of 13 fragments of chapters among the 4942 bamboo strips known as the Yinqueshan Han Slips, which were discovered in April 1972 in Yinqueshan Tombs no. 1 and 2 at the foot of Yinqueshan (Sliver Sparrow Mountain) southeast of the city of Linyi in the province of Shandong, China. Each bamboo strip is about 28 centimeters long, 0.7 centimeter wide and 0.2 centimeter thick. The characters on the bamboo slips were written in lishu, a clerical script from the Han Dynasty.

"The time of burial for both tombs had been dated to about 140 BC/134 BC and 118 BC, the texts having been written on the bamboo slips before then. After restoration and arrangement, the slips were organised into a sequential order of nine groups and 154 sections. The first group included 13 fragment chapters from Sunzi's The Art of War, and 5 undetermined chapters; the second group were the 16 chapters of Sun Bin's Art of War, which had been missing for at least 1,400 years; the third included the 7 original and lost chapters from the Six Strategies (before this significant find only the titles of the lost chapters were known); the fourth and fifth included 5 chapters from the Wei Liaozi and 16 chapters from the Yanzi; the rest of the groups included anonymous writings" (Wikipedia article on Yinqueshan Han Slips, accessed 01-30-2010).