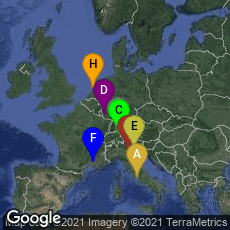 Renaissance Humanists Hunt for the Manuscripts of Roman Authors Painting of Coluccio Salutati c. 1450, from a codex in the Biblioteca Laurenziana, Florence.

"The recognition that they were not Romans, that the Roman past was essentially other, differentiated Renaissance writers from their medieval counterparts. Lovato Lovati's colleague Albertino Mussato (1262-1329) could compose a tragedy in Senecan metre for an ancient purpose, to rouse the citizens of Padua to civic action. Petrarch (1304-74) could compose letters to Cicero in Ciceronian style, though Boccaccio (1313-76) still mingled quotations from ancient and medieval authors without recognizing that they were inherently different. The recognition that Rome was a culture basically distinct from their own was largely the work of humanists and they, as Martines has shown, were trained first and foremost in law. A legal training involved competence in the arts of discourse—in the writing of letters. One letter from Florentine chancellor Coluccio Salutati (1331-1406) was said by a contemporary to be worth 5,000 soldiers. The models of style to which they turned were ancient letters: Seneca's, the Younger Pliny's, Symachus', and (after Petrarch had rediscovered them) Cicero's to Atticus and to others of his friends. Teachers of discourse like Guarino of Verona (1374-1460) were the umanisti or humanists in whose hands lay the revival of Antiquity. The Roman past was recognized as something removed in time, definably different, and of interest as an ideal, which one might escape into as did Petrarch or which one might use as a goad to challenge the indolent present; thereupon it became something to be sought. The hunt was on for manuscripts of Roman authors collecting dust in ecclesiastical libraries. Humanists served as diplomats, and their search for and discoveries of the texts of Roman authors took place in stolen moments in the course of their diplomatic missions to European courts ecclesiastical and secular. Hence Petrarch assembled his text of Livy in Avignon, where his patron Landolfo Colonna attended the papal court; hence Poggio (1380-1459) tired of the business of the Council of Constance (1414-17), explored the book cupboards of St-Gall. Nicholas of Cues  [Nicholas of Cusa] (1401-64) very naturally visited the libraries of Egmont and St. Maximin in Trier, along with scores of others equally interesting, in his capacity as papal legate to Germany. Not unlike their forerunners Lupos of Ferrieres, Wibald of Corvey, Philip of Bayeux, Richard de Fournival, diplomats of the fourteenth and fifteenth centuries searched the libraries of abbeys and cathedrals for ancient authors. While libraries were the sources for texts, the agencies by which texts were disseminated were especially two: (1) the international meeting places, such as the seats of ecclesiastical authority, the papal court at Avignon (1309-77), the great Councils of Constance (1414-18) and Basel (1431-49) and Rome itself—crossroads where diplomats from the South met those from the North; and (2) the humanist-diplomats themselves through their networks of like-minded friends and correspondents. Even without external evidence one can see, for example that Petrarch was single-handedly responsble for the introduction to fourteenth-century Italian humanists of a whole series of ancient texts; these are texts for which the parent of an entire branch of the manuscript tradition obviously once belonged to him, since the derivative manuscripts belonged in large part to his friends and their friends" (Rouse, "The Transmission of the Texts," Jenkyns [ed] The Legacy of Rome: A New Appraisal [1992] 50-51).

Foundation of the Library of the Sorbonne, and "Perhaps the Earliest Specific and Organized System of Book Arrangement in a Library"