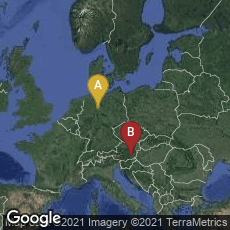 "The world’s first patient-ready and commercially available brain computer interface just arrived at CeBIT 2010. The Intendix from Guger Technologies (g*tec) is a system that uses an EEG cap to measure brain activity in order to let you type with your thoughts. Meant to work with those with locked-in syndrome, or other disabilities, Intendix is simple enough to use after just 10 minutes of training. You simply focus on a grid of letters as they flash. When your desired letter lights up, brain activity spikes and Intendix types it. As users master the system, a few will be able to type as quickly as 1 letter a second. Besides typing, it can also trigger alarms, convert text to speech, print, copy, or email" (http://singularityhub.com/2010/03/07/intendix-the-brain-computer-interface-goes-commercial-video/, accessed 03-16-2010).

NOTE: When I returned to this entry in September 2020 the product had been renamed "Unicorn, the Brain Interface" and perhaps more significantly the price had been lowered to 990€ plus shipping.