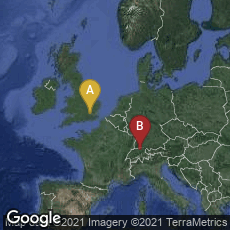 Ray and Francis Willoughby studied bird life together, during 1662-63 visiting the west coast of England, the Netherlands, journeying up the Rhine Valley to Zürich, visiting Italy, with Willoughby continuing to Spain. They were the first ornithologists to discard the Aristotelian principles of classification by function, replacing them with a morphological system based on beak form, foot structure and body size that reflected the true relationships even better than Linnaeus’s “natural system” of sixty years later. They were also the first to develop a classification of birds that was independent of geographical boundaries. The credit for this system almost certainly belongs to Ray, who prepared the final version of the Ornithologia from notes left at Willoughby’s death, and who had done the major part of the observations and records during their years of partnership. In an attempt to bring order out of the chaos of tradition, Ray collated his and Willoughby’s observations against those recorded by all previous writers, eliminating duplicate species, species vaguely described or reported on hearsay, and species that were clearly fabulous. An English version, which Ray also prepared, was published in 1678. A few copies of the Latin edition were published on large paper and hand-colored.