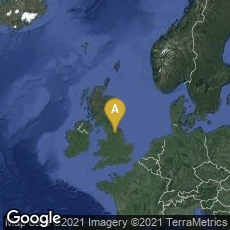 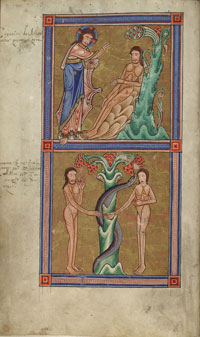 The Hunterian Psalter (Sp Coll MS Hunter U.3.2 [229]), a striking example of Romanesque book art, was produced in England in the latter part of the twelfth century.

"It is uncertain where or when, exactly, the manuscript was produced, or for whom. It has been suggested that it was produced for Roger de Mowbray (d. 1188), a prominent 12th century crusader and religious benefactor known to have founded a number of Augustinian and Cistercian monasteries and nunneries. The book also contains three commemorations to Augustine of Hippo, which has led some scholars to conclude that the manuscript might have been created for a house of Augustinian Canons, or by someone with a connection to the Augustinian order.

"The fact that there is no mention of the 29 December feast of Thomas Becket on the page for December is thought to indicate that the book was produced before Becket's canonization in 1173. For most of its history, it was thought to have been the product of a scriptorium in the north of England, owing to its inclusion of a number of 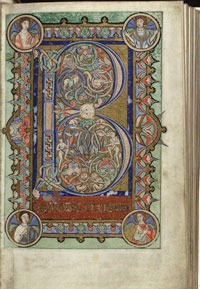 northern saints such as Oswald of Northumbria and John of Beverley (who very seldom occur outside northern manuscripts), although modern scholarly consensus puts its likely origin in the southwest of England.

"There is no definite consensus about the number of artists who worked on the book. It has been suggested that a single master oversaw the work of several assistants, and it has also been put forth that it is the work of an artist working alone, copying and adapting templates from other illuminated manuscripts. It is thought to have been the work of skilled tradesmen, not monks" (Wikipedia article on Hunterian Psalter, accessed 03-27-2010).

Today the manuscript is considered the finest book in the library of 10,000 printed books and 650 manuscripts formed by the physician and connoisseur collector, William Hunter, who bequeathed all his collections to the University of Glasgow. In addition to manuscripts and books Hunter made important collections of coins, paintings, minerals, shells, anatomical and natural history specimens.

Hunter acquired this volume at the auction sale conducted by Guillaume-François de Bure of the library of Louis-Jean Gaignat in Paris on April 10, 1769, along with several other books. His French agent, Jean B. Dessain, bought it at the auction on Hunter's behalf for fifty livres and one sou. It was described in the sale catalogue as a "codex pervetustus" (a very old codex), and the price was considerably lower than many of the printed books in the sale, reflecting the tastes and market prices of the time. (The Gaignat library included such treasures as the Gutenberg Bible printed on vellum in the British Library.)

Young & Aitken, A Catalogue of the Manuscripts in the Library of the Hunterian Museum in the University of Glasgow (1908) no. 229.

In 2019 Special Collections at the University of Glasgow Library provided a large selection of images from The Hunterian Psalter at this link.