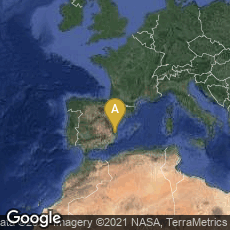 Image Source: funci.org
Muhammad al Idrisi holding. up his map of the world.  The statue is in Ceuta, an autonomous Spanish city on the northern coast of Africa.

'Paper is there manufactured, such as cannot be found anywhere else in the civilized world, and is sent to the East and to the West" (Hunter, Papermaking: The History and Technique of an Ancient Craft, 2nd ed [1947] 473).