Image Source: Photo courtesy of Lee R. Berger and the University of Witwatersrand 2010.

The clavicle discovered by Matthew Berger on August 15, 2008. 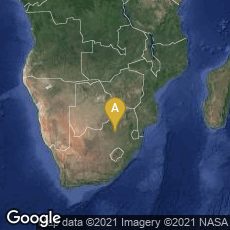 On April 7, 2010 American paleoanthropologist, physical anthropologist and archaeologist Lee R. Berger of the Institute for Human Evolution, University of the Witwatersrand, Johannesburg, South Africa, and the University of Arkansas, announced the discovery in the Cradle of Humankind World Heritage Site in South Africa of a new species of hominid named Australopithecus sediba, which lived 1.95 million to 1.78 million years ago. The first portion of the fossil remains were discovered by Berger's nine year old son Matthew.

"In a report being published Friday in the journal Science, Dr. Berger, 44, and a team of scientists said the fossils from the boy and a woman were a surprising and distinctive mixture of primitive and advanced anatomy and thus qualified as a new species of hominid, the ancestors and other close relatives of humans. It has been named Australopithecus sediba.

"The species sediba, which means fountain or wellspring in the seSotho language, strode upright on long legs, with human-shaped hips and pelvis, but still climbed through trees on apelike arms. It had the small teeth and more modern face of Homo, the genus that includes modern humans, but the relatively primitive feet and “tiny brain” of Australopithecus, Dr. Berger said.

"Geologists estimated that the individuals lived 1.78 to 1.95 million years ago, probably closer to the older date, a period when australopithecines and early species of Homo were contemporaries.

"Dr. Berger’s team said that the new species probably descended from Australopithecus africanus. At a teleconference on Wednesday, he described the species as a possible ancestor of Homo erectus, an immediate predecessor to Homo sapiens, or a close “side branch” that did not lead to modern humans" (http://www.nytimes.com/2010/04/09/science/09fossil.html?hp, accessed 04-08-2010).

♦ An unusual feature of the discovery was that it was assisted by satellite imagery.

"At the beginning of this project, there were approximately 130 known cave sites in the region and around 20 fossil deposits. With the help of the navigation facility and high-resolution satellite imagery in Google Earth, Professor Berger went on to find almost 500 previously unidentified caves and fossil sites, even though the area is one of the most explored in Africa. One of these fossil sites yielded the remarkable discovery of a new species, Australopithecus sediba. This species was an upright walker that shared many physical traits with the earliest known species of the genus homo — and its introduction into the fossil record might answer some key questions about our earliest ancestry in Africa" (http://googleblog.blogspot.com/2010/04/google-earth-helps-discover-rare.html, accessed 04-08-2010).