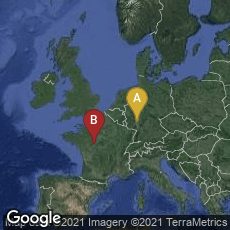 A portrait of Charles VII of France by Jean Fouquet.

According to manuscript records of the French royal mint on October 4, 1458 Charles VII of France ordered the masters of his mints to find a well qualified agent to go to Mainz to learn the art of printing, which had recently been invented by Johann Gutenberg, a man adept at cutting punches and 'caractères'. Nicholas Jenson, (Nicolas Jenson), for some time master of the mint at Tours, was selected for the mission. From this beginning, Jenson became one of the greatest punch cutters and printers of the 15th century.

This was the first contemporary reference acknowledging Gutenberg as the inventor of printing.