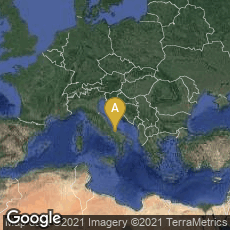 In 1269 Pierre de Maricourt (Petrus Peregrinus) an engineer in a French army besieging Lucera in southern Italy, was in charge of fortifying the camp, laying mines and constructing machines to hurl stones and fireballs into the besieged city. In his spare time he attempted to solve the problem of perpetual motion. He devised a diagram to show how a wheel might be driven round forever by the power of magnetic attraction. Excited by his discovery, he wrote a treatise in the form of a letter on the properties of the lodestone which he had discovered during his experiments. This letter, which circulated in manuscript, was given the title Epistola de magnete. In it Peregrinus was the first to assign a position to the poles of a lodestone.  He proved that unlike poles attract, while like poles repel. He also established by experiments "that every fragment of a lodestone, however small, is a complete magnet, and determined the position of an object by its magnetic bearing . . . ." Peregrinus also described how a compass is constructed.

The Epistola is considered the earliest known European work of experimental science, and the foundation of the study of electricity and magnetism. It was first issued as a printed book in 1558.

"Prior to the introduction of the compass, wayfinding at sea was primarily done via celestial navigation, supplemented in some places by the use of soundings. Difficulties arose where the sea was too deep for soundings and conditions were continually overcast or foggy. Thus the compass was not of the same utility everywhere. For example, the Arabs could generally rely on clear skies in navigating the Persian Gulf and the Indian Ocean (as well as the predictable nature of the monsoons). This may explain in part their relatively late adoption of the compass. Mariners in the relatively shallow Baltic made extensive use of soundings.

"In the Mediterranean, however, the practice from ancient times had been to curtail sea travel between October and April, due in part to the lack of dependable clear skies during the Mediterranean winter (and much of the sea is too deep for soundings). With improvements in dead reckoning methods, and the development of better charts, this changed during the second half of the 13th century. By around 1290 the sailing season could start in late January or February, and end in December. The additional few months were of considerable economic importance; it enabled Venetian convoys, for instance, to make two round trips a year to the eastern Mediterranean, instead of one."