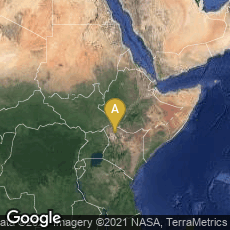 The Earliest Preserved Footprints of Our Ancestors Footprints discovered by Jack Harris, Brian Richmond, and David Braun in 2007 at the Homo erectus site of Ileret  are "the oldest undisputed evidence of hominins (probably Homo erectus) walking in an efficient style like we do."

The footprints were found in Koobi Fora, located on the eastern shore of Lake Turkana, in the territory of the nomadic Gabbra people in Kenya.

"A key question about human origins concerns when our style of upright walking became fully modern. Today, we walk with a long stride and a spring-like mechanism in the arch of our foot that makes our walking very energetically efficient. In 2007, Drs. Harris, Richmond, Braun, and colleagues discovered the first of many footprints made by our early hominin relatives 1.51-1.53 million years ago at the site of FwJj14E at Ileret, Kenya. The prints show evidence of a well-developed arch in the foot, that contributes to efficient walking, and evidence of a long stride ending in a propulsive 'toe-off' like the characteristic toe-off of modern people. More footprints were found in 2008-2009, so Smithsonian researchers Drs. Richmond and Behrensmeyer, and their colleagues, are optimistic that this site will yield more footprints and shed more light on the origin of human walking and running" (https://humanorigins.si.edu/evidence/behavior/footprints/footprints-koobi-fora-kenya, accessed 8-2020).