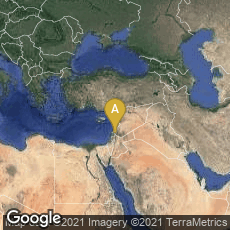 The Earliest Hearths, Excavated at Gesher Benot-Ya'agov in Israel "The earliest hearths are at least 790,000 years old, and some researchers think cooking may reach back more than 1.5 million years. Control of fire provided a new tool with several uses—including cooking, which led to a fundamental change in the early human diet. Cooking released nutrients in foods and made them easier to digest. It also rid some plants of poisons.

"Over time, early humans began to gather at hearths and shelters to eat and socialize. As brains became larger and more complex, growing up took longer—requiring more parental care and the protective environment of a home. Expanding social networks led, eventually, to the complex social lives of modern humans" (http://humanorigins.si.edu/evidence/behavior/hearths-shelters, accessed 05-10-2010).

Fire-altered stone tools found in 2004 at Gesher Benot-Ya’aqov, Israel by a team led by Naama Goren-Inbar include stone tools scorched by fire close to concentrations of burnt seeds and wood, indicative of early hearths