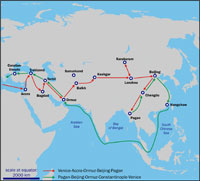 In 1271 Maffeo and Niccolò Polo set out on a second journey carrying Pope Clement IV's response to Kublai Khan, in 1271. This time Niccolò took his son Marco. When Marco Polo arrived at Kublai Khan's court he became a favorite of the khan and was employed in China for 17 years. "In the 8th Year of Zhiyuan (1271), Kublai Khan officially declared the creation of the Yuan Dynasty, and proclaimed the capital to be at Dadu (Chinese: 大都; Wade–Giles: Ta-tu, lit. "Great Capital", known as Daidu to the Mongols, at today's Beijing) in the following year. His summer capital was in Shangdu (Chinese: 上都, "Upper Capital", a.k.a. Xanadu, near what today is Dolonnur)" (Wikipedia article on Kublai Kahn, accessed 01-25-2012).

"In his book, Il Milione, Marco explains how Kubilai officially received the Polos and sent them back — with a Mongol named Koeketei as an ambassador to the Pope. They brought with them a letter from the Khan requesting educated people to come and teach Christianity and Western customs to his people, and the paiza, a golden tablet a foot long and three inches wide, authorizing the holder to require and obtain lodging, horses and food throughout the Great Khan's dominion. Koeketei left in the middle of the journey, leaving the Polos to travel alone to Ayas in the Armenian Kingdom of Cilicia. From that port city, they sailed to Saint Jean d'Acre, capital of the Kingdom of Jerusalem."

"The long sede vacante — between the death of Pope Clement IV, in 1268, , and the election of Pope Gregory X, in 1271— prevented the Polos from fulfilling Kublai’s request. As suggested by Theobald Visconti, papal legate for the realm of Egypt, in Acres for the Ninth Crusade, the two brothers returned to Venice in 1269 or 1270, waiting for the nomination of the new Pope (Wikipedia article on Niccolò and Marco Polo, accessed 04-04-2010).