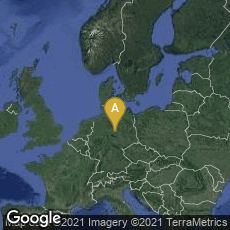 Four wooden spears found at Schöningen, Germany, by Hartmut Thieme in 1995, along with stone tools and the butchered remains of about 20 horses, are thought to date from c. 400,000 BCE. They are the oldest human-made wooden artifacts, as well as the oldest weapons ever found. Three of them were probably manufactured as projectile weapons, because the weight and tapered point is at the front of the spear making it fly straight in flight, similar to the design of a modern javelin. The fourth spear is shorter with points at both ends and is thought to be a thrusting spear or a throwing stick. One of the horse remains found with the spears included a pelvis that still had a spear sticking out of it. This is considered proof that early humans were active hunters with specialized tool kits.

"Hunting large animals was a risky business. Long spears were thrust into an animal, enabling our ancestors to hunt from a somewhat safer distance than was possible with earlier weapons" (https://humanorigins.si.edu/evidence/behavior/getting-food/oldest-wooden-spear accessed 05-10-2010).