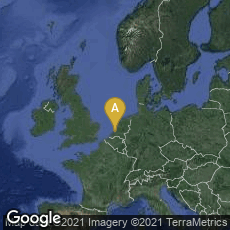 Han van Meegeren, the Most Successful Art Forger Ever "Van Meegeren craftily exploited art historians’ desire to discover early works by Johannes Vermeer. During a famous court case in which Van Meegeren was accused of Nazi collaboration, he admitted that he had forged old master paintings, including several Vermeers. Museum Boijmans Van Beuningen had acquired one of the fake Vermeers from Van Meegeren. The exhibition explores Van Meegeren’s technique, his masterpieces and his downfall.

"The exhibition ‘Van Meegeren’s Fake Vermeers’ includes approximately ten forgeries by Han van Meegeren (1889-1947). Most are in the style of Johannes Vermeer, but the works also include forgeries of Frans Hals, Pieter de Hooch and Gerard ter Borch. Van Meegeren’s life as a forger is further illuminated through a documentary film and objects from his studio. A masterpiece In 1937 the director of Museum Boymans, Dirk Hannema, purchased ‘The Supper at Emmaus’ for 540,000 guilders. There was great interest in the painting, which most experts believed to be an early masterpiece by Vermeer. The Rijksmuseum in Amsterdam even offered Vermeer’s ‘The Love Letter’ in exchange for the painting, but Hannema rejected the offer. Museum Boymans exhibited the work as one of the highlights of its collection and art experts praised the work’s high quality.

"At the end of the Second World War a painting from the Netherlands was found in the collection of the Nazi minister, Hermann Göring. The painting was traced back to Han van Meegeren, who was immediately arrested on suspicion of collaboration. Van Meegeren admitted to having sold the work, but also claimed to have made the painting himself. He had sold Göring a forgery. Van Meegeren’s confession became worldwide news and he was hailed as a hero as ‘the man who swindled Göring’. Meanwhile the art world was thrown into disarray. Van Meegeren demonstrated his forgery techniques to an expert panel and during his trial his forgeries were hung in the courtroom, as can be seen in the documentary film included in the exhibition.

"Van Meegeren’s technique remains exceptional. For his masterpiece ‘The Supper at Emmaus’, Van Meegeren used a genuine seventeenth-century canvas and historical pigments. He bound the pigments with bakelite, which hardened when heated to produce a surface very similar to that of a seventeenth-century painting. This technique, combined with Van Meegeren’s choice of subject matter and composition, was an important factor in convincing so many people of the authenticity of his works. Van Meegeren created the missing link between Vermeer’s early and late works. The exhibition at Museum Boijmans Van Beuningen sheds new light on Van Meegeren’s technique, resulting from new technical research undertaken by the Rijksmuseum" (http://www.artdaily.org/index.asp?int_sec=2∫_new=38022, accessed 05-14-2010).