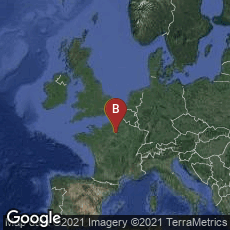 Foundation of the Library of the Sorbonne, and "Perhaps the Earliest Specific and Organized System of Book Arrangement in a Library" 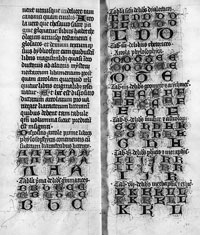 In 1271 theologian Gerard d' Abbeville, a Parisian master and neighbor of Robert de Sorbon, bequeathed nearly 300 volumes of manuscripts to the Library of the Sorbonne. This gift became the core of the Sorbonne Library, and of the roughly 300 original volumes, 118 remain preserved in the Bibliothèque nationale de France today. d'Abbeville's bequest incorporated the library of Richard de Fournival, author of the library catalogue entitled Biblionomia. In his history of the manuscript collections from which the Bibliothèque nationale was formed, Le cabinet des manuscrits de la Bibliothèque Impériale, Leopold Delisle characterized this catalogue as "one of the most curious monuments of the bibliographic art of the Middle Ages. The only manuscript which has survived of this small work is 'très-incorrect', and cannot be dated before the beginning of the 15th century. Having belonged to the Collège des Cholets, it is today part of the library of the Université de France at the Sorbonne...." (translation mine, from 518-19).

According to Delisle, Fournival used a garden metaphor to describe his library, in which the various branches of knowledge each have their plot, but beyond the metaphor Fournival described a specific classification scheme, coordinating desk or shelf letters or numbers with different kinds of letters and colors of letters. The first division of the library was devoted to philosophy, which Fournival further broke down into nine categories on eleven shelves, arranged partly according to volume size:

The second division of Fournival's Biblionomia was devoted to what Delisle calls "sciences lucratives"--medicine, civil law and canon law.

The third division of the library was theology, i.e. texts and commentaries on the Holy Scriptures and writings of the fathers of the church.

Delisle pointed out that even though Fournival described the exact content of books in 162 volumes it is difficult to say for sure whether these volumes were ever assembled outside of Fournival's imagination. However, whether imaginary or not, Deslisle felt that the Biblionomia was "rich in valuable information for literary history" and he reprinted the Latin text of Biblionomia in Le cabinet des manuscrits de la Bibliothèque Impériale II (1874) 518-535.

According to the Wikipedia article on Fournival, 35 manuscripts from his library remain preserved in various libraries, which would indicate that Fournival owned at least a portion of the works that he described in Biblionomia.

Ullman, The Library of the Sorbonne in the Fourteenth Century. The Septicentennial Celebration of the Founding of the Sorbonne College in the University of Paris. [1953] 38-39.