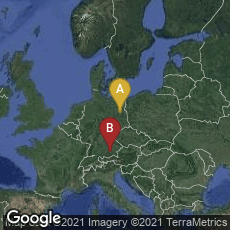 In 1923 Romanian-German physicist Hermann Oberth published Die Rakete zu den Planetenräumen in Munich and Berlin at the press of R. Oldenbourg. This book began as a doctoral thesis on the rocket in interplanetary space which Oberth submitted to the University of Heidelberg in 1922. When the thesis was rejected by the university Oberth paid for its commercial publication. The work was highly influential on the founding in 1927 of the German amateur rocket society, Verein für Raumschiffahrt, to which most of the early German rocketeers belonged, and which became a focal point of early rocketry research.

In his book Oberth set out to prove four propositions: (1) that the technology of the time permitted the building of machines capable of rising above the earth’s atmosphere; (2) that these machines could attain velocities sufficient to prevent their falling back to earth, or even to escape the earth’s gravitational pull; (3) that such machines could be built to carry human beings; and (4) that under certain conditions, their manufacture might be profitable. Oberth demonstrated that a rocket can operate in a vacuum and that it can surpass the velocity of its own exhaust; he also pointed out the superiority of liquid fuels in producing maximum exhaust velocity. He described in detail the designs of a prototypical instrument-carrying rocket and a theoretical space-ship, and developed the first sketchy model of a space station.

Oberth dedicated the 1929 work to Fritz Lang and Thea von Harbou, director and writer respectively of Frau im Mond (1929) one of the world’s first serious science fiction films. Oberth served as a consultant on the film, which was the first to present the basics of rocketry to a mass audience, and his income from that project was crucial in allowing him to complete the book.

Wege zum Raumschiffahrt was the first work to receive the REP-Hirsch International Astronautics Prize established in 1928 by French rocketry pioneer Robert Esnault-Pelterie and André-Louis Hirsch; the prize was awarded annually between 1929 and 1939. The purpose of the prize was to recognize “the best original theoretical or experimental works capable of promoting progress in one of the areas permitting the realization of interstellar navigation or furthering knowledge in a field related to astronautics.” In the epilogue to his book, Oberth acknowledged receipt of the REP-Hirsch Prize and expressed his surprise and gratitude that a French organization “would award such a prize to a German . . . It is encouraging to see that science and education are able to bridge national differences” (p. [424]).

An English translation of Oberth's 1929 book, Ways to Spaceflight, was published by NASA in 1972, and is downloadable from NASA's website.