Entrance to Paviland Cave. (Click on image to view larger.) 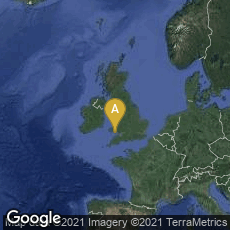 The First Genuine Human Fossil Skeleton Discovered by a Scientist

Bones of the "Red Lady of Paviland", who was actually male. (Click on image to view larger.)

In 1823 British paleontologist the Very Reverend William Buckland published Reliquiae diluvianae; or, Observations on the Organic Remains Contained in Caves, Fissures, and Diluvial Gravel, and on Other Geological Phenomena, Attesting the Action of an Universal Deluge. Among the most notable aspects of this elegant pioneering work on the exploration of so-called "bone caves," was Buckland's report with illustrations, of the discovery of a human skeleton in Paviland Cave (Goat's Hole Cave), one of the limestone caves between Port Eynon and Rhossili, on the Gower Peninsula, south Wales. The skeleton was associated with the bones of extinct animals. Though Buckland initially presumed that the skeleton was male, he later revised his presumption to female because of a bracelet found with the skeleton then thought to be made of ivory, but since recognized to have been made from the bones of a mammoth. Since the skeleton's bones were stained with ochre, the skeleton became known as the "Red Lady of Paviland." This incomplete skeleton Buckland considered “anterior to, or coeval with, the Roman invasion of this country” (p. 92). Because of the prevailing religious/scientific views of his time, Buckland did not recognize its ancient age, and could not accept the idea of human fossils. Much later, the skeleton was recognized as the first genuine human fossil skeleton discovered by a scientist. In 2013 it remained the oldest ceremonial burial of a modern human discovered in Western Europe.

“Decades before the establishment of human antiquity or evolutionary theory, it suggested questions about human origins to science. In fact, Aldhouse-Green has playfully pointed out that our Paleolithic European forebears should be called Pavilandians instead of Cro-Magnons because the Red Lady has priority of nearly forty years over the discoveries made in France” (Sommer, Bones and Ochre. The Curious Afterlife of the Red Lady of Paviland [2007] 2-3).