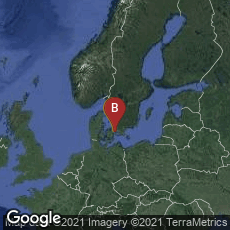 Danish archaeologist, Christian Jurgensen Thomsen, the first curator of the National Museum of Denmark in Copenhagen, edited and published in Copenhagen a guidebook to the national museum entitled Ledetraad til Nordisk Oldkyndighed. In this small book Thomsen formulated a method of classifying the museum’s archeological collections according to whether the artifacts were made of stone, bronze or iron. He claimed that these three groupings represented three chronologically successive archeological ages; this was the genesis of the Three-Age system, “the basic chronology that now underpins the archaeology of most of the Old World” (Rowley-Conway, From Genesis to Prehistory. The Archaeological Three Age System and its Contest Reception in Denmark, Britain, and Ireland [2007] 1).

The second chapter of the guide, contributed by Thomsen, described his dating scheme and applied it to the monuments and antiquities of the North. Thomsen defined the three ages as follows:

"The Age of Stone, or that period when weapons and implements were made of stone, wood, bone, or some such material, and during which very little or nothing at all was known of metals....

"The Age of Bronze, in which weapons and cutting implements were made of copper or bronze, and nothing at all, or but very little was known of iron or silver....

"The Age of Iron is the third and last period of the heathen times, in which iron was used for those articles to which that metal is eminently suited, and in the fabrication of which it came to be employed as a substitute for bronze" (Thomsen, Guide to Northern Archaeology [1848], pp. 64–68).

Thomsen was a scholar with a background in the history of numismatics rather than a field archaeologist. He based his study of artifacts on the associations between stylistic change, decoration and context, topics which may have interested him initially through his numismatic researches. Thomsen recognized the importance of examining objects from "closed finds," allowing him to determine the common associations of artifacts for various periods which he divided into his Three-Age system. Thomsen’s assistant. archaeologist Jens J. A. Worsaae, later demonstrated the stratigraphic succession of the stone, bronze and iron ages in Denmark through archeological fieldwork.

An English translation of Ledetraad til Nordisk Oldkyndighed, by the Earl of Ellesmere, was published in 1848. Spencer, Ecce homo (1986) no. 3.488.