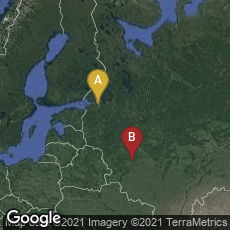 These papers represented the beginnings of the modern era of spaceflight theory, preceding the earliest publications of Robert Goddard (1919) and Robert Esnault-Pelterie (1913). "Tsiolkovsky had grasped the principle of reaction flight as early as 1883, and his 'Exploration of Space Using Reactive Devices' (1903) contains the first mathematical exposition of the reaction principle operating in space. In ‘Issledovanie mirovykh prostranstv reaktivnymi priborami’ . . . Tsiolkovsky set forth his theory of the motion of rockets, established the possibility of space travel by means of rockets, and adduced the fundamental flight formulas” (Dictionary of Scientific Biography).

“Tsiolkovsky not only solved theoretically such age-old questions as how to escape from the Earth’s atmosphere and gravitational field, but he also described several rockets. The first, conceived in 1903, was to be powered by liquid oxygen and liquid hydrogen—a very modern propellant combination . . . [Tsiolkovsky] made another discovery—the multistage rocket, which he called the ‘rocket train.’ Actually, this concept was not as new as Tsiolkovsky, who discovered it independently, thought; firework makers had used the principle for at least 200 years. But Tsiolkovsky was the first to analyze the idea in a sophisticated manner. The multistage technique, he concluded, was the only feasible means by which a space vehicle could attain the velocity necessary to escape from the Earth’s gravitational hold” (Von Braun & Ordway, History of Rocketry and Space Travel [1975] 42).

Tsiolkovsky’s “Issledovanie mirovykh prostrantsv’ reaktivnymi priborami” was published in three parts, issued irregularly over a period of 13 years. Both the first and second parts were published as journal articles, the second part appearing over ten numbers of the Vestnik’ Vozdukhoplavania between 1911 and 1912. The third part, published by Tsiolkovsky, was intended as a supplement to the first two parts, which even then had become very difficult to find: In a note printed on the inside front cover of the 1914 pamphlet, Tsiolkovsky stated that the earlier works were unobtainable, and that he himself had only one copy.  According to historian of rocketry Frank Winter, most copies of Tsiolkovsky's 1903 paper were suppressed, as  “the May 1903 issue of Nauchnoe Obozrenie also contained a politically revolutionary piece that led to the confiscation of almost all issues by the authorities” (Winter, "Planning for Spaceflight: 1880s to 1930s," in Blueprint for Space, ed Ordway and Liebermann [1992] 104-05.)

The significance of Tsiolkovsky's work in rocketry and space travel was greatest in Russia where it inspired the early development of rocketry and aerospace research independent of American and European workers. Tsiolkovsky's writings were also known to German rocketry researchers by the 1920s.