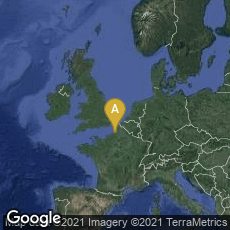 Boucher de Perthes' Pioneering Treatise on the Antiquity of Man For a person who published many books and became very well known in his lifetime Boucher de Perthes was hardly ever portrayed. This is one of the only portraits of him from life.

French writer, archeologist, and antiquary Jacques Boucher de Perthes privately issued in an edition of 100 copies from Abbeville De l'industrie primitive ou des arts à leur origine in 1846. This was his first work on the ancient stone implements discovered at Abbeville where he was Director of customs. In 1837, following the lead of Casimir Picard, Boucher de Perthes began investigating Abbeville’s rich archeological and paleontological sites. He donated some of the products of his early excavations to the Muséum national d’histoire naturelle in Paris, directed by the geologist Pierre-Louis Cordier. It was in response to a request by Cordier in a letter dated July 12, 1840 that Boucher de Perthes made his first discovery of an “antediluvian” stone tool, a biface Paleolithic axe found in 1840 in the Menchecourt quarry outside of Abbeville. The layer of sand in which the stone axe was found also contained the bones of extinct mammalian species, indicating that the axe was coeval with these species. The Menchecourt axe, and other “antediluvian” artifacts found in nearby sites, convinced Boucher de Perthes that humanity was very much older than had previously been supposed.

Boucher de Perthes attempted to alert the scientific community to his findings via correspondence with Cordier and other prominent scientists, but was ignored. Undiscouraged, he kept up with his excavations, and also began writing De l’industrie primitive, in which he described and illustrated with simple line drawings the results of his first decade of excavation, and made the case for the antiquity of the human species based on the stratigraphic relationship between “antediluvian” stone tools and the bones of extinct mammals. In 1846 he had a very small edition of this work printed, which must have been intended mostly for presentation to colleagues such as Cordier. In that same year Boucher de Perthes sent the manuscript of De l’industrie primitive to the Académie des Sciences in the hope of a favorable review. The Académie appointed a five-man commission, headed by Cordier, to prepare an evaluation of Boucher de Perthes’ work; in the end, however, the Académie declined to issue a report.

Boucher de Perthes had intended to publish De l’industrie primitive for wider circulation in 1847, but held up publication pending approval of the Académie. After receiving Cordier’s polite but negative response in 1849 Boucher went ahead and re-issued the volume with a new title, Antiquités celtiques et antédiluviennes, referencing the ancient age of to which the antiquities belonged—a time before the Biblical flood. The printed title page was dated 1847, but a pasted-in printed note opposite stated that “this work, printed in 1847, could not, because of circumstances, be published until 1849.”

"It is now some years since a distinguished French antiquary, M. Boucher de Perthes, in his work, entitled ‘Antiquités Celtiques et Antédluviennes’ called attention to the discovery of flint implements fashioned by the hand of man in the pits worked for sand and gravel in the neighbourhood of Abbeville, in such positions, and at such a depth below the surface of the ground, as to force upon him the conclusion that they were found in the very spots in which they had been deposited at the period of the formation of beds containing them. The announcement by M. Boucher de Perthes, of his having discovered these flint implements under such remarkable circumstances, was, however, accompanied by an account of the finding of many other forms of flint of a much more questionable character, and by the enunciation of theories which by many may have been considered as founded upon too small a basis of ascertained facts. It is probably owing to this cause that, neither in France nor in this country, did the less disputable nor completely substantiated discoveries of M. de Perthes receive from men of science in former years the attention to which they were justly entitled" (Evans, "Flint Implements in the Drift,” Archaeologia XXXVIII [1860] 2).