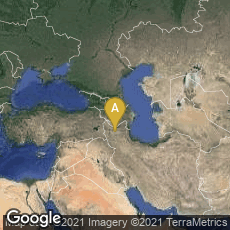 There is a Clear Record of Early Block Printing in Tabriz 16th-century schematic map of Tabriz by Matrakçı Nasuh. The two separate halves of the maps were combined.

"Tabriz is the only place in the Islamic world where there is a clear record of early block printing. In the year 1294 at this Mongol capital of Persia there was an issue of paper money with text in Chinese and Arabic.. . . . The notes. . .were direct copies of Kublai's, even the Chinese character being imitated as part of the device upon them. . .There was an Arabic inscription on each note to the effect that the notes were issued in the year 693 of the Moslem era (A.D. 1294), that all who issued false notes should be summarily punished, and that 'when these auspicious notes were put in circulation, poverty would vanish, provisions become cheap, and rich and poor be equal.' The prophecy was not fulfilled. After the constrained use of the new ch-ao for two or three days, Tabriz was in an uproar; the markets were closed; Izzudin, the minister who had proposed the issue, became the object of intense hatred and according to some accounts was murdered; and the whole project had to be abandoned.

"This dramatic issue of a printing project a century and a half before Gutenberg in a great comsopolitan community near the confines of Europe could have not gone unobserved in the commercial republics of Italy" (Carter, Invention of Printing in China 2nd ed [1955] 170-71).

Printing by Handpress or by Hand
Economics
Commerce / Trade