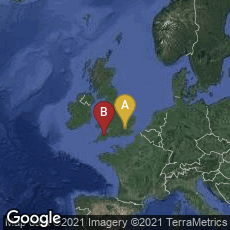 Reproductions of the first ten Penguin Books, republished in facsimile.

In 1935 Allen Lane founded Penguin Books in London to bring high quality, paperback fiction and non-fiction to the mass market. Lane is credited with essentially inventing the mass marketing of paperbacks. According to company legend, Lane got his idea while standing in a railway station in Devon, where he had been spending the weekend with the mystery writer Agatha Christie and her husband. He couldn’t find anything worthwhile to buy to read on the train back to London. So he launched Penguin Books, with ten titles, including The Murder on the Links, by Agatha Christie. The books sold well right from the start.

The key to Lane’s innovation was not the format; it was the method of distribution. Lane designed the mass-market paperback to be displayed in wire racks that could be conveniently placed in virtually any retail space. People who didn’t have a local bookstore, and even people who would never have ventured into a bookstore, could now browse the racks while filling a prescription or waiting for a train and buy a book on impulse. Lane believed that his books should not cost more than a pack of cigarettes. This meant that people could spot a book they had always meant to read, or a book with an enticing cover, and pay for it with spare change.

"Anecdotally Lane recounted how it was his experience of the poor quality of reading material on offer at Exeter train station that inspired him to create cheap, well designed quality books for the mass market. Though the publication of literature in paperback was then associated mainly with poor quality, lurid fiction the Penguin brand owed something to the short lived Albatross imprint of British and American reprints that briefly traded in 1932. Inexpensive paperbacks did not initially appear viable to Bodley Head, since the deliberately low price of 6d. made profitability seem unlikely. This helped Allen Lane purchase publication rights for some works more cheaply than he otherwise might have done since other publishers were convinced of the short term prospects of the business. In the face of resistance from the traditional book trade it was the purchase of 63,000 books by Woolworth that paid for the project outright, confirmed its worth and allowed Lane to establish Penguin as a separate business in 1936. By March 1936, ten months after the company's launch on 30 July 1935, one million Penguin books had been printed (Wiklipedia article on Penguin Books, accessed 07-11-2013).

In 1985, to commemorate the 50th anniversary of the founding of the company, Penguin Books issued a boxed set reproducing in facsimile the first ten titles issued in 1935. However, as often, the story is not quite so uncomplicated:

In December 2022 Paul Novitski pointed out that on August 11, 2013 Karyn Reeves in A Penguin a week: A blog about vintage Penguin paperbacks stated that one of Penguin's first titles, The Mysterious Affair at Styles," was published twice by Penguin during its early years, the first time as no. 6, and then later as Penguin no. 61. It was one of two titles originally provided to the fledgling company by Bodley Head for inclusion in their first ten books, but contractual problems led to its withdrawal a few months later and its replacement with the alternative Agatha Christie title The Murder on the Links, numbered initially as Penguin no. 6A.

"But in later reissues, to confuse matters, The Murder on the Links was renumbered as Penguin no. 6, so that Penguin's first ten actually comprises eleven titles...."