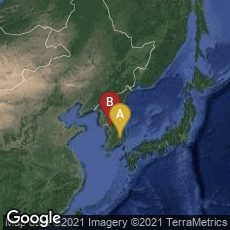 Perhaps the Earliest Movable Metal Types are Created in Korea In January 2012 twelve metal Chinese characters were discovered. These may be the earliest movable type, predating those used to print the Jikji Simche Yojeol in 1377. According to Prof. Nam Kwon-heui of Kyungpook National University (KNU) (경북대학교), abbreviated as Kyungdae(경대), in Daegu, South Korea, the metal characters were located in a private collection in Korea.

"The owner of the movable type was quoted as saying he bought them around 10 years ago and was told they were discovered during Japan's occupation of Korea and that a Japanese collector smuggled them out of Korea after World War II.

"The only other movable metal type presumed to date back to the Koryo Kingdom [The Goryeo Dynasty or Koryŏ] is in the National Museum of Korea[Seoul] and the Kaesong Museum of History [Kaesŏng, North Hwanghae Province, southern North Korea (DPRK)] which have one sample each. The type used to print the "Jikji" has yet to be discovered. The "Jikji," an anthology of the teachings of the Buddha for meditation, is held by the National Library of France since the country looted them during a botched invasion in the late Chosun Dynasty.

"In order for the newly found movable type to be dated correctly, experts need to analyze composition, metal craftsmanship and how they were handed down through history" (http://english.chosun.com/site/data/html_dir/2010/09/02/2010090200639.html