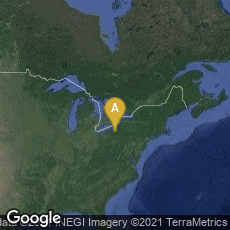 The First Successful Oil Well is Drilled in Titusville, Pennsylvania "In the 1850s the market for light-producing liquid fuels was dominated by coal oil and by an increasingly inadequate supply of whale oil. However, George Bissell, a lawyer from New York, and his partner Jonathan Greenleaf Eveleth had a revolutionary idea. They thought there was a possibility of the crude “rock oil” (now petroleum) that had been cropping up in western Pennsylvania being used as an illuminatory substance. At the time, rock oil was nothing but a smelly hindrance to the well-diggers of the region, with some limited medicinal properties. Yet Bissell and Eveleth, after realizing how flammable the liquid was, believed there was great money to be made in producing rock oil commercially, marketed as lamp fuel and such. But they needed someone- an important, well-respected scientist whose name they could attach to their financial venture, to research the material to find out whether or not it could be used in such a manner. Enter Benjamin Silliman Jr., professor of chemistry at Yale University.

"Benjamin Silliman Jr.’s primary contribution to the chemical world, and certainly the world as a whole, involved the fractional distillation of petroleum, analyzed mainly for the purpose of its qualities of illumination. He was asked to do this as one of the most prominent chemists of his time, and his report [1855] on the subject afterwards had extremely far-reaching influences. The immensely important main idea of his report was that distilled petroleum burned far brighter than any fuel on the market, except those that were far more expensive and less efficient. His conclusion was that petroleum is 'a raw material from which...they may manufacture a very valuable product.' Silliman also noted that this material was able to survive through large ranges of temperature, and the possibility of it being used as a lubricant.

"The impact of the discovery of petroleum as a high-quality illuminator is obvious. At the time, however, Bissell and Eveleth simply brought some people together to form the 'Pennsylvania Rock Oil Company'- shortly after to be renamed the 'Seneca Oil Company,' after another common, regional name for petroleum. Edwin Drake was in charge of drilling the well, and after many setbacks, generally revolving around the lack of money, he struck oil in quiet, rural, Titusville, Pennsylvania on August 27, 1859. The scenery of Titusville changed almost overnight. Oil derricks and towns filled with get-rich-quick speculators filled the newly-named Oil Creek. The holes were generally unremarkable, especially by the standards of today; the first probably only gathered less than 20 barrels of oil a day. However, the influence of these oil wells, and Benjamin Silliman Jr.’s report confirming the use of petroleum as an illuminant, was massive. Almost equally important in Bissell’s idea and Silliman’s discovery was the use of rock oil for lubrication of the many moving parts in the mechanical age soon to come" (Wikipedia article on Benjamin Silliman, Jr., accessed 09-16-2010).