Only surviving page from the first draft of the Manifesto, handwritten by Karl Marx. Preserved in the International Institute for Social History, Amsterdam. 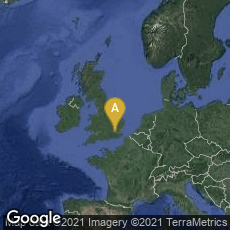 Supplies of the pamphlet reached the continent just as the Revolutions of 1848 began.

"The revolutionary upsurge in Europe owed nothing to the 'Manifesto'; but the panic-stricken authorities found its subversive sentiments a good excuse for action against its authors. Marx and his wife were arrested and expelled from Belgium. Later the Neue Rheinische Zeitung, Marx's principal organ of expression, was suppressed in Cologne, the final issue being defiantly printed in red, and Marx himself was expelled in turn from Germany and France. He then emigrated to England ('the most important landmark in his career' as E. H. Carr put it), where he spent the rest of his life—much of it in the reading room of the British Museum. He is buried in Highgate cemetery in London" (Carter & Muir, Printing and the Mind of Man [1967] no. 326).

Rather than predicting communism's future forms, The Communist Manifesto set out the League's purposes and program. It presented an analytical approach to the class struggle and the problems of capitalism.

"The Communist Manifesto was first published (in German) in London by a group of German political refugees in 1848. It was also serialised at around the same time in a German-language London newspaper, the Deutsche Londoner Zeitung. The first English translation was produced by Helen Macfarlane in 1850. The Manifesto went through a number of editions from 1872 to 1890; notable new prefaces were written by Marx and Engels for the 1872 German edition, the 1882 Russian edition, the 1883 French edition, and the 1888 English edition. This edition, translated by Samuel Moore with the assistance of Engels, has been the most commonly used English text since" (Wikipedia article on The Communist Manifesto, accessed 09-18-2010).