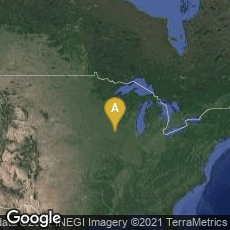 From Palmer's Guide to Business Writing (1894)

"Palmer's method involved 'muscle motion' in which the more proximal muscles of the arm were used for movement, rather than allowing the fingers to move in writing. In spite of opposition from the major textbook companies, this textbook enjoyed great success: in 1912, 1,000,000 copies were sold throughout the country. The method garnered awards, including the Gold Medal at the Panama Pacific Exposition in San Francisco, California, in 1915, and the Gold Medal at the Sesquicentennial Exposition in Philadelphia, Pennsylvania, in 1926.

"Palmer's style fell out of popularity and was replaced by a movement to teach children manuscript before teaching them cursive, in order to provide them with a means of written expression as soon as possible and thus develop writing skills. This effectively reduced the emphasis on handwriting in elementary school . . . . " (Wikipedia article on Palmer Method, accessed 09-19-2010).