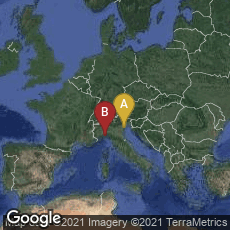 While in prison in Genoa from 1298 to 1299 Marco Polo supposedly dictated a book to a romance writer, Rustichello da Pisa. His work, which was very frequently copied, was a rare popular success in the period before printing.

"The impact of Polo's book on cartography was delayed: the first map in which some names mentioned by Polo appear was in the Catalan Atlas of Charles V (1375), which included thirty names in China and a number of other Asian toponyms. In the mid-fifteenth century the cartographer of Murano, Fra Mauro, meticulously included all of Polo's toponyms in his map of the world. Marco Polo's description of the Far East and its riches inspired Christopher Columbus's decision to try to reach Asia by sea, in a westward route. A heavily annotated copy of Polo's book was among the belongings of Columbus. Polo's writings included descriptions of cannibals and spice growers" (Wikipedia article on The Travels of Marco Polo, accessed 04-04-2010).

"His book, Il Milione (the title comes from either 'The Million', then considered a gigantic number, or from Polo's family nickname Emilione), was written in the Old French and entitled Le divisament dou monde ('The description of the world'). The book was soon translated into many European languages and is known in English as The Travels of Marco Polo. The original is lost, and we have several often-conflicting versions of the translations. The book became an instant success — quite an achievement in a time when printing was not known in Europe."

"An authoritative version of Marco Polo's book does not exist, and the early manuscripts differ significantly. The published versions of his book either rely on single scripts, blend multiple versions together or add notes to clarify, for example in the English translation by Henry Yule. Another English translation by A.C. Moule and Paul Pelliot, published in 1938, is based on the Latin manuscript which was found in the library of the Cathedral of Toledo in 1932, and is 50% longer than other versions. Approximately 150 variants in various languages are known to exist, and without the availability of a printing press many errors were made during copying and translation, resulting in many discrepancies" (Wikipedia article on Marco Polo, accessed 01-29-2010).

In spite of its wide fame, recent scholars question whether Marco Polo actually went to China.

"The Greatest Memorial of Medieval Cartography"
Medieval Mappa Mundi, Stolen during an Auction, and then Lost
NCR Issues the Smallest Published Edition of the Bible, and the First to Reach the Moon